EU Referendum: the end of the Norway option? 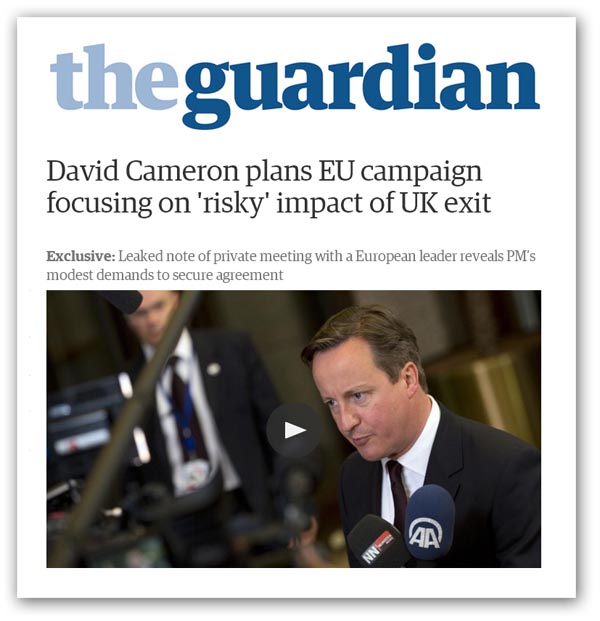 Barely, if at all, mentioned by the legacy media this week was a report issued on Tuesday - the so-called Five Presidents' Report on completing Europe's economic and monetary union.

This, we think, must be taken with other indicators, and details emerging from the European Council, together with the Council conclusions, Mr Cameron's own comments on the referendum timing and the Bertelsmann Stiftung Fundamental Law.

Putting all these sources together, together with the views of the Commission President, and the idea of the Prime Minister brokering associated membership status with the EU now looks even more plausible. The "colleagues" plan to launch the treaty process that will allow this in late 2017, the moment the UK's referendum is over. Completion is scheduled by 2025 at the very latest.

As the Bertelsmann "Fundamental Law" points out, though, associate membership could also cater for the needs of Norway, Iceland and Switzerland, "seeking to improve on their present unsatisfactory arrangements". Presumably, this will also include Liechtenstein, pulling all four EFTA countries into the Greater European Union, to total 32 countries.

The attraction for the "NILS" countries is that they add MEP and Council representation to their current EEA/bilateral arrangements, removing the oft-repeated complaint of lack of voting power or "influence" over Single Market laws.

The "inner circle" will comprise members of the eurozone, which will sole access to the "inner Council", with European Parliament sessions set up to deal exclusively with eurozone business.

Of immediate concern to the UK referendum campaign is that Mr Cameron will, at the eleventh hour, offer association as a form of "rebranded" EU membership, pointing out that the offer will also be available for the NILS countries.

In this scenario, both the Swiss and Norway options will disappear, leaving the "no" campaign seriously bereft of viable exit plan options. Potentially, this could be very damaging, especially as the "WTO option" is guaranteed to bring the UK economy to a halt.

However, in anticipation of this problem, and to address perceived weaknesses in the Norway option, we have been doing some rebranding of our own. Specifically, we've been looking at the "shadow EEA" option, our fallback in the event that the UK's application to rejoin EFTA fails or if the UK is blocked from staying in the EEA.

As the Flexcit plan stands, if this happens, we have the UK seeking to negotiate a bilateral agreement to adopt the entire Single Market acquis. The UK would adopt the same mechanisms for the incorporation of new laws, so that there would be no divergence once the agreement was in place.

However, there is a further option, not dissimilar to the line taken by the Australian government in 1997. Then, it signed a joint declaration on EU-Australian relations, followed two years later by a Mutual Recognition Agreement. The scope exists for the UK to do likewise, or to make a unilateral declaration, up to and including a commitment to full regulatory harmonisation (which already exists).

A full harmonising commitment would be akin to the shadow EEA agreement, only made unilaterally. As such, it would not need assent from EU member states. Given that commitment, the UK would then be in a very strong position to insist on access to Single Market, invoking WTO non-discrimination rules.

Add the MRA agreement, and an agreement on tariffs, and then a bilateral agreement on programme participation and there is an almost exact equivalence with EEA Agreement.

Carried out under the aegis of Article 50, the negotiations would be given a formal framework. As long as the UK did not seek preferential access to the Market, on better terms than were available to a full member, there would seem to be no serious obstacles to an agreement.

Inevitably, though, this requires some agreement from EU Member States. Yet, it is posited by WTO advocates that the "no" campaign cannot promote an option which relies on bilateral agreements.

This is based on the experience of the Scottish referendum, when Alex Salmond was confronted with the question of which currency an independent Scotland might use. He was unable to offer a solution in the event that the UK authorities refused to permit continued participation in sterling. It is thus held that the "no" campaign cannot afford a similar refusal.

However, any comparison with the situation pertaining to the UK's exit negotiations is flawed. Not least, the negotiations are taking place within a treaty framework.

Within this framework, not only does Article 50 require Member States to negotiate with the departing state, Article 3 of the Consolidated Treaties requires the Union to, "contribute to … free and fair trade". Article 21 requires that the Union, "work for a high degree of cooperation in all fields of international relations, in order to … encourage the integration of all countries into the world economy, including through the progressive abolition of restrictions on international trade".

Furthermore, the EU Treaties themselves exist within the framework of the Vienna Convention on the Law of Treaties which requires the parties to act in "good faith". Then "good faith" in itself is "almost certainly" a principle of customary international law, and indeed is a principle of WTO law.

Any idea that the EU, within the framework of Article 50, as reinforced by the separate Articles within the Treaties, and further reinforced by international law, would refuse to negotiate on basic issues of trade, and not strive in good faith to reach an agreement, simply does not lie within the realm of practical politics. And, should there clear breach of EU treaty obligations, those breaches might well be a remedy through proceedings in the ECJ.
The whole rationale for discarding Flexcit, and instead going for the WTO option, is fundamentally flawed. This is especially so as the WTO option also requires bilateral agreements to make it work, essentially making it a theoretical construct, with no basis in reality.

Thus, we aver that stage one of Flexcit offers as reasonable an assurance of an amicable exit settlement as could be anticipated, and one which will secure the UK's continued participation in the Single Market, with or without the EEA.

But since we now offer not one but three mechanisms for securing exit, we feel it would no longer be appropriate to call stage one the Norway option. Nor would we even to claim that this is a preferred option. In terms of our rebranding, what we now suggest calling it the "Market Solution", reflecting the outcome that we seek and would almost certainly be able to secure.

Whether or not, Mr Cameron therefore comes up with the idea of associated membership, we will still have something better.