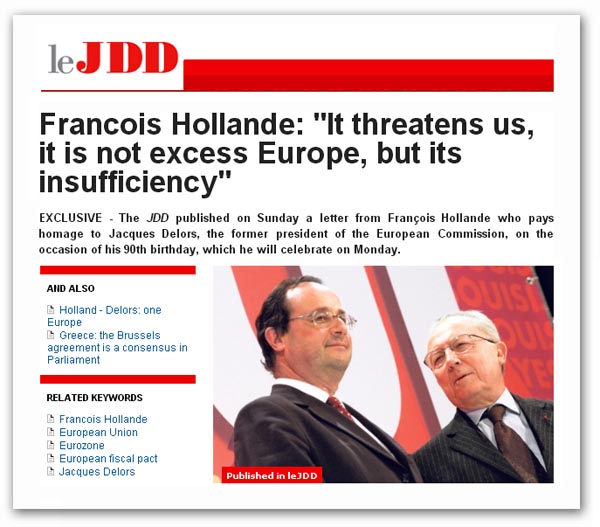 Recalling that Delors set the original terms for the single currency, he proposed to take up Delors's idea for a government of the euro area, with a specific budget and a dedicated parliament "to ensure democratic control".

"Sharing a currency", Hollande wrote, "was much more than wanting a convergence. It is a choice that 19 countries had made because it was their national interests". But that choice "calls for a strengthened organisation, an advance guard of the countries who will decide on it", he added, then declaring that: "What threatens us is not an excess of Europe but its insufficiency".

Elaborating on this, the regional Nice-Matin newspaper noted that the President did not specify the scope, the timing or the institutional functioning of this new governance. However, Prime Minister Manuel Valls stated that this "vanguard" would consist of the six founding countries of the EEC (France, Germany, Italy, Belgium, Netherlands and Luxembourg).

For the rest, Vallis remained as vague as Mr. Holland, saying merely that the government "is working on a text to support the proposals of the President and make proposals to our partners in the autumn". The aim is to produce a text in the summer, which will form the basis for debate.

"Politics needs ambitious, self-transcendence and ideals", Vallis commented Sunday, noting also that a prerequisite of the debate was "a discussion with Germany to find a consensus".

And while it has been noted that there has been no specific reaction to Mr Hollande's proposal in Berlin, last Friday there was an interview by Der Spiegel of German Finance Minister Wolfgang Schäuble.

Schäuble readily acknowledged that the EU had "to expand the competencies of the economic and currency union", noting that the five presidents of the European institutions recently submitted their proposals on this (with a timescale starting in 2017). In the coming months, said Schäuble, "this will provide a basis for discussing what can be done to make the euro zone more stable".

Thus we seem to have France and Germany very much singing from the same hymn sheet, with France playing the typical game of claiming ownership of the proposals for treaty change.

Nevertheless, the concept of a eurozone "vanguard" is very much foreseen in the Bertelsmann Fundamental Law published in 2013. Although it does not refer specifically to a "vanguard", it does refer to the term "core group", which means the same thing.

This splits the EU between the eurozone, which is transformed into a fiscal union run by a federal economic government, and a new category of associate membership for any member state which chooses not to join the federal union.

Now, with Hollande and Schäuble placing treaty change on the agenda, sharing very much the same language (although reversion to the "Six" is French polemics), the possibility of change is firming up, and the tempo is quickening.

If the French are preparing to produce a paper for the summer, it is hard to see how this cannot feed in to the UK's referendum debate. And it must only be a matter of time before the prospect of "associate membership" starts to make an impact – especially if Mr Cameron chooses to make an issue of it.

Given the timing of treaty negotiations, with the possibility of a convention in the Spring of 2018, one can see Mr Cameron offering a promise of associate membership as the "prize" for our own referendum - the "new relationship" that he has held up before us for so long.
Just to confuse the issue, and to unbalance the "no" campaign, he could also offer a second referendum – under the "treaty lock" provisions – to approve the details. We could be finding, therefore, that Mr Cameron defuses our "yes-no" referendum by promising that a "yes" vote will deliver us a second chance, with the option of a "no" vote then giving us the chance to leave, if we feel so inclined.

This, at the moment, can only be speculation, but what isn't speculation is that the ground is shifting. The parameters and working assumptions which we held when Mr Cameron announced there would be a referendum, via the Queen's speech are by no means as certain as they were.

There is a very real danger now that the referendum will have to be fought on terms none of us originally imagined, shifting the balance of advantage. It may be taking us into unfamiliar territory, where we are almost completely unprepared. And this is before we even know the polling date.