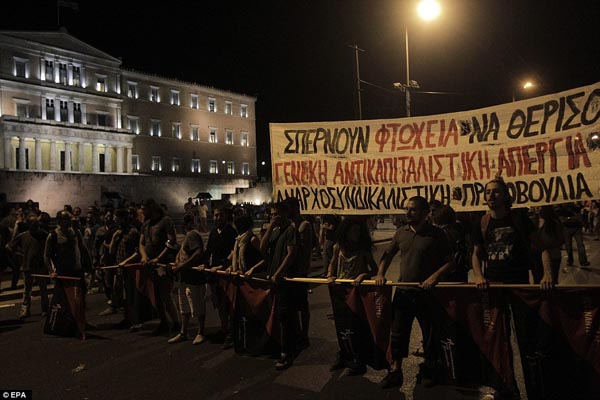 As time progresses, it becomes more and more clear how the bulk of the media commentariat misread the Greek crisis.

We can see this from the delicious way German Finance Minister Wolfgang Schäuble puts down Nobel Prize winner Paul Krugman, who then goes on to admit that there was never any prospect of Greece leaving the eurozone. Needless to say, there are still those caught up in the theatre and others who miss the point, not understanding that Greece was the classic beneficial crisis.

But there are others. There is, for instance, Anatole Kaletsky who has popped up from obscurity to say that the Greek deal is not that bad after all. One might suggest that one factor that makes it not so bad is that, in addition to the bailout, the EU is giving Greece straight grants of €35 billion - a fact scarcely if at all mentioned by the commentariat.

As was always going to be the case, though, the Greek situation is contained, the country having served its purpose in bringing all the other states into line, ready for the next round of treaty-making.

If anyone has a problem, therefore, it is our "no" campaign - given that the analysis in my previous post is anywhere near correct. That tells us that, at some time during campaign, there will be an announcement that the EU intends to seek a new treaty, following which there will be treaty convention.

The logical timing for this announcement – or declaration - is the autumn of 2017, putting it just ahead of the referendum. And at the point, Mr Cameron will have the task of explaining how he intends to handle this development, the outcome of which may be that the UK is offered "associate member" status.

In one possible scenario, the Prime Minister may pretend that the development is of his own making – that he has prevailed upon the "colleagues" to include associate member status in their treaty deliberations, giving the UK the opportunity to redefine its relationship with the EU and thus fulfilling his promise to the nation.

Doubtless, the idea of this new status will be heavily spun, although there will be few details. The Bertelsmann Fundamental Law itself does not go in to detail, allowing that "each associate state would negotiate its own arrangement with the core states".

That would permit Mr Cameron to present a "yes" vote in the coming referendum as a mandate for him to negotiate the details and bring back the optimum arrangement for the UK. And, in such a scenario, the new treaty goes through the convention process and then the Intergovernmental Conference (IGC), coming out the other end for ratification in 2021 or 2022.

That process will trigger the "treaty lock" referendum, which will allow Mr Cameron to ask approval of a treaty which will open the way to the UK applying for associate status, with a "no" vote cast as the first step towards leaving the EU.

Effectively, in what could now be a two-referendum contest, the first referendum is converted from a straight "yes-no" on whether we leave the EU, to request for a mandate for change. The second then becomes a request to approve the change, with a "sudden death" option of leaving the EU if it is rejected.

This, of course, is speculation, but not wholly so. As I remarked yesterday, there is too much activity for the discussion on a new treaty to be random "noise". The only uncertainty in my mind is the timing, and that is hardly speculative, having been set out in the Five Presidents' report.

The idea of Kerneuropa (core Europe) is now so firmly embedded in the process, with the concomitant associate membership, that the only real question can be how Mr Cameron will handle the news when it becomes official. On the other side, of course, is the question of how the putative "no" campaign will deal with the associate membership scenario.

If, as we see from the Bertelsmann Fundamental Law, associate membership is also to be offered to the EFTA States, with a possible ending of the EEA agreement, then the "no" campaign is left without two of its planks – the "Norway" and "Swiss" options. At the same time, it will be having to confront what is superficially a very attractive alternative.

A danger, in my view, is that we decide to do nothing until a new treaty process is announced, and associate membership is formally on the agenda. That might leave us with only a very short time to counter an entirely new scenario, having been robbed of some of our major campaigning tools.

My first thinking on this is that we should pre-empt the possibility of Mr Cameron reshaping the campaign, by attacking the concept of associate membership and by offering a better alternative.

Historically, I recall that earlier British governments rejected the possibility of associate membership instead of full membership of the EEC. It would be interesting and potentially useful to know the grounds on which the idea was rejected, and whether those arguments could be used today.

As to better alternatives, I am minded to go for a "partnership of equals" scenario, similar to that which was originally offered by Delors when the EEA was first mooted. We need to push for a genuine, Europe-wide single market rather than the Brussels-centric model of a Europe of concentric circles.

Certainly, if the idea of associate membership is introduced and dominates the debate, many of the arguments currently deployed by "no" campaigners may be rendered obsolete. By way of an insurance policy, there is every reason to be focused on what is needed to defeat what looks to be a very real possibility.

There is another advantage in going early, anticipating an official announcement with a high profile campaign against associate membership. It prevents Mr Cameron pretending it was his idea, or something he had negotiated. A UK prime minister responding to an EU initiative has an altogether different feel, and the threat is somewhat defused.

On the other hand, there will always be those who hold different views and who will make a virtue out of ignoring analyses from outside the bubble. Others, especially those in the "yes" camp, simply don't have the first idea of what is going on.

For the eurosceptic "community", though, the ultimate question becomes - as always - one of whether they want to win this referendum or whether players are more interested in debating a limited number of propositions while remaining firmly within their comfort zones.

Bizarrely, we see from Hansard in 1968 debates that would not look out of place if they were held today on virtually identical terms, so little have the basic arguments changed. We can do them all over again, spreading tedium throughout the land, or we can win the referendum. But it is unlikely that we can do both.