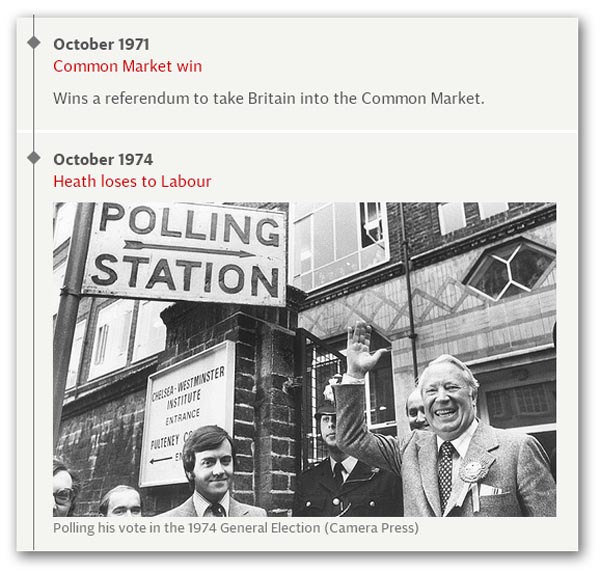 The Telegraph website offers a timeline for Ted Heath's career, with the gem illustrated above, telling us of him winning a 1971 referendum to take us into the Common Market. There, in one entry, we have three errors: the referendum was in 1975, not 1971, it was under Wilson not Heath, and it was to remain in the Common Market. We did not have a referendum on entry.

If I made this sort of schoolboy howler, my blog would rightly be laughed out of court, yet this is a newspaper which advertises itself as the source for the "best reporting and analysis", and proclaims itself "proud to deliver news to 16.8 million people every month".

This is the same newspaper which manages a scarcely believable level on incompetence in its reporting on asylum seekers and is thus surviving by prestige alone, demonstrating once again the point made by Gustave le Bon that:

… the special characteristic of prestige is to prevent us seeing things as they are and to entirely paralyse our judgement. Crowds always, and individuals as a rule, stand in need of ready-made opinions on all subjects. The popularity of these opinions is independent of the measure of truth or error they contain, and is solely regulated by their prestige.

The seriousness of this is readily apparent when we realise that these are the organs that are going to seek to influence the debate on the EU referendum, purporting to explain the issues and then advising us how to vote.

Campaigners are going to have to realise that they can rely on nothing they read in the media, and need to become more self-reliant, checking information before using it and taking more care before accepting what they are told.

One readily appreciates that not all people have the time to do this, in which case it is better to be silent than to spread false information. We have to regard everything as provisional until it is possible to check it.

And that, of course, applies across the board, with the Guardian - predictably – just as capable of spreading misinformation as the "right wing" press. The mistake is to believe that there is any difference between them. None of them are reliable, even if the errors sometimes cover different territory.

In this case though, we are getting applied stupidity from Matthew d'Ancona, who argues that the Calais situation is providing the "perfect showreel" for the "no" campaign. Oddly, this comes just at the point when the Mail publishes a sympathetic piece about the plight of asylum seekers, itself illustrating that, whenever there a focus on a particular story, you eventually get a backlash, when the other side gets an airing.

Going back to the ghastly Telegraph, we have the stopped clock effect – even a stopped clock tells the time accurately twice a day. The only problem is, you don't know when. This story, though, has the right "feel" to it, having the "furious" French blaming the UK for the "Calais chaos". They complain that we are dumping our problems on them by refusing to process migrants on our own shores.

This, indeed, is the case, If it was not for the fact that British immigration officials in the port of Calais were refusing to accept asylum claims, and handing back asylum seekers to the French authorities, invoking the Le Touquet Treaty, then there would not be a backlog of migrants waiting to cross the Channel. Instead, we would have the problem in the UK, having to open up special camps for them.

Unsurprisingly, therefore, the UK's "predicament" is getting scant sympathy in Brussels, with a long report in the Financial Times bringing forward comments that other countries are having to deal with ten times the volume of migrants. In what is a global crisis, the UK is getting off relatively lightly.

There lies another problem with the media. Even if individual stories are accurately reported, the distortion comes in the emphasis on one particular issue, or on just one aspect of it. We are not getting a balanced view, and the sin of omission dominates the coverage.

Not least, there is a continuing situation between France and Italy, where border controls have effectively been reinstated. Nearly every train from Ventimiglia, the final Italian railway station before Menton, is searched for Middle Eastern or African-looking passengers.

French authorities, according to the FT, are saying that they are catching about 1,000 migrants a week, reaching the record levels of a year ago when about 15,000 were turned back to Italy. It is not as if the French are not taking action therefore – just that the British media is not reporting it.

From our point of view, as "no" campaigners, this is potentially dangerous. Ukip and others have mistakenly hitched their wagons to the Calais issue, in the hope that it will bring them support. But the referendum is a long time coming, and by the time it arrives, the current scenes will be history. The public perception of the problem may be very different to what it is now.

We're seeing the same thing with Greece, where the "eurosceptic" press have insisted on affording it victim status, contrasted with the big, bad bully EU, which its grinding its face into the dust. But now we get the Guardian, countering the meme raised by its own star columnists. There is, it says …

… much that is wrong in the left's narrative. It doesn't mention that Greece had many deep-seated problems that pre-dated the creditor-imposed austerity: rampant tax evasion, an epidemic of early retirement, a bloated public sector and a private sector carved up by special interests. These problems need to be corrected before Greece can thrive. It doesn't help to label these necessary reforms as neoliberal. What is progressive about people not paying taxes and retiring under the age of 50?

Once again, with the referendum a long time coming, we may see a change of mood, with a very different presentation in the press on Greece by the time we come to vote. Those who have relied on the picture so far, painted by the bulk of the media, may have been sorely misled.

And that makes the overall point. Despite the claims of the Telegraph, the so-called "newspapers" no longer deliver news – if they ever did. They are propaganda organs, with their own agendas and their own distorted views of the world.

In fighting the "no" campaign, we have to realise that the media's agenda is not our agenda, and if we follow their lead, even if their line looks promising, we could end up like a beached whale when the tide of public and media sentiment turns.

We needs to be in command of our own agenda. That means being better informed than the media – which is not difficult – and defining our own issues and priorities. Just because something is temporarily high profile in the propaganda sheets does not mean it is good for us, or that we should follow it.
Discrimination and a longer term overview would serve us better than any media "take" on events.