EU Referendum: a meeting of minds 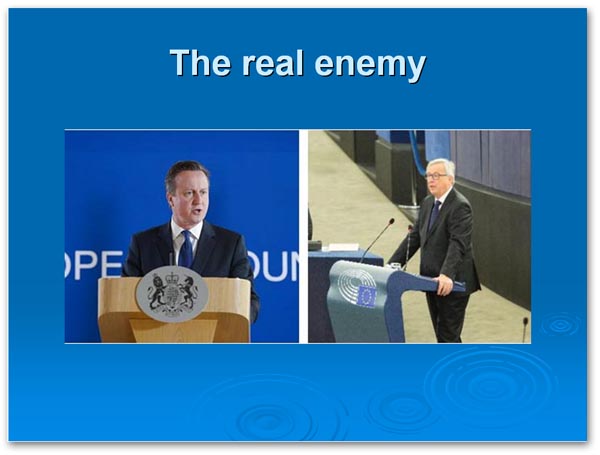 At some time on Saturday while we were in session at Leamington Spa - I can't recall exactly when - the news came thought that Jeremy Corbyn had been elected by a sweeping majority as leader of the Labour.
The obvious concern to us is his potential impact on the referendum but, as The Boiling Frog points out, his is unlikely to be our friend.

That is probably just as well – we do not need allies like Corbyn. In fact, the whole point of a referendum is that the people take over from the politicians and make up their minds on an issue they have failed to resolve. On this, Corbyn and any other politician have as many votes as any one of us.

Effectively, that was why we held the Leamington meeting – a workshop on strategy. It was a meeting in which we – the people – could lean how to operate and make a difference in what is a potentially winnable contest.

Strategy, and its importance, was the subject a post in July, when we discussed the work of Gene Sharp. Taking one of his other works, From Dictatorship to Democracy, we see him writing:

If one wishes to accomplish something, it is wise to plan how to do it. The more important the goal, or the graver the consequences of failure, the more important planning becomes. Strategic planning increases the likelihood that all available resources will be mobilized and employed most effectively.

"To plan a strategy", Sharp adds, "means to calculate a course of action that will make it more likely to get from the present to the desired future situation".

Another crucial point we picked up more recently, the quote from Sun Tzu, where he told us:

An army may be compared to water, for water in its natural flowing avoids the heights and hastens downwards. So in war and Army should avoid strength and strike at weakness. As water shapes its flow in accordance with the nature of the ground, an army manages to be victorious in relation to the enemy it is facing. As water retains no constant shape, so in war there are not constant conditions. One who can modify his tactics in accordance with his enemy's situation and succeed in gaining victory may be called divine.

Putting the two together, but with Sun Tzu first, we note that, although it is important to focus our strategy in relation to the enemy we are facing, it is vital to identify the correct enemy.

Here we note that, while there will be an official "remain" campaign, the Government is also a player and is in fact the real enemy. The official campaign is largely an irrelevance, its primary task being to distract eurosceptics and keep them from focusing on the core issues.

The real enemy, therefore, is represented by David Cameron, supported by the EU – represented by Jean-Claude Juncker – with George Osborne also heavily involved.

In order to engage with the enemy, it stands to reason that we must be aware of their strategy and intentions, in order we are able to respond rapidly and effectively counter their moves. To that effect we need to invest heavily in intelligence gathering and analysis. This should enable us to respond to the main thrust, to neutralise it and then mount a counter-attack.

With our best guesses on timing putting the most likely date as October 2017, that makes our best option to watch and prepare. Although many campaigners feel the need to be "doing something", a key part of campaigning is recruiting the right people and training them.

In a complex battle, where information will be at a premium, it is remarkable that so many organisers feel that grassroot activists and even their own staff can function without adequate training. In few other fields of human activity can consistent and effective performance be attained without a degree of training, yet we seem to believe that eurosceptics can break the mould, and operate without it.

While we wait, of course, that does not rule out an element of skirmishing, but it should be effects-based, aimed at achieving specific outcomes, like selective "decapitation" of opposition targets.

Only once the enemy has revealed its hand – or we are satisfied that we have good intelligence indicating intentions – can we then break out in to the public arena and attempt to neutralise their efforts. If, as we suspect, Mr Cameron is going to offer associate membership, then we must stress the downside – the disadvantages - and then come up with better alternatives.

In terms of organising the campaign, we must assume it is to be a long campaign. There will be multiple players and, if current experience is any guide, there will be no strategy co-ordination, fragmented effort and an absence of focus.

That much is evident – with Ukip already going its own way, TheKnow.eu in the field demonstrating no strategic vision, and a "no campaign" run by Matthew Elliott, which has yet to offer any convincing evidence that it is on top of its game.

This is where the Referendum Planning Group comes in, aiming to submit an application to the Electoral Commission for lead campaigner, not least to keep the other applicants honest. In anticipation of this, Robert Oulds of the Bruges Group has prepared a conventional structure for a campaign.
This, though, is only part of the strategy. We are also working on a "reserve structure" which can take over and recover the ground when the other campaigns fail – which we expect them to do. This concept we explored in a recent post and is the means where we believe individuals are best able to contribute, on their own behalf. Working to limited objectives, a small number of highly focused activists can use multiple communications channels to achieve a disproportionate effect.
But with that much stated, the meeting brought out complaints about the attacks on Ukip, with one attendee later writing that such criticism could turn people off supporting the RPG.

This, however, is to miss the point. We are not asking for support, per se. We do not own the campaign  – it must be a peoples' campaign. We are trying to support individuals, outside the remit of established parties and groupings, offering help and guidance. The idea is to empower people who want to campaign and who feel they want to be effective.

We can concentrate on intelligence gathering, recruiting kindred spirits and training them. It is then up to individuals to build their own communities and extend the reach of the campaign beyond the inward-looking eurosceptic minority. But essentially, each individual is their own master and established groups retain their own identities and campaign in their own names.
We work to a common cause, delivering a common, coordinated message, because that is what, as individuals, we choose to do. But we do it without a formal structure - the antithesis of the top-down campaigns currently in place.
We think that a loose network of 200 individuals – highly motivated self-starters – would be sufficient for a campaign reserve. Reliant mainly on the internet (but using all available communication channels), we are confident that that can build effective communications that can quickly reach hundreds of thousands of people, and then millions.

The idea is to use a cascade system, where core information providers – principally (but not exclusively) operating as a network of bloggers – can pass key information to contacts and each other, share intelligence. That was, they can offer focus and campaign guidance to their own communities. Each community in turn can pass the message through social media to others, who can then reach others.
At the heart of the system is focus, and message discipline – two things eurosceptics have lamentably failed to achieve. But the decision to coordinate efforts comes from the individual. We do it because we want to do it, because we accept that coordination of the message, and a common approach is the only way to make ourselves heard above the noise.
This will be the key to our success. We cannot rely on the legacy media is not only incompetent, it is most likely going to support Mr Cameron at a late point in the campaign, and call for voters to remain in the EU. Our own communications are essential. But in the internet, we have the ability to reach 90 percent of the households in Britain.

More on this comes from Lost Leonard and the message is spreading via Conservatives for Liberty and White Wednesday. But, to sum up, we need strategy, intelligence, focus and discipline. We can provide guidance on strategy, and offer intelligence and analysis for anyone to use. But the rest is up to individuals. This is a referendum where the people decide. The decision as to whether we will do what is necessary to win is yours.