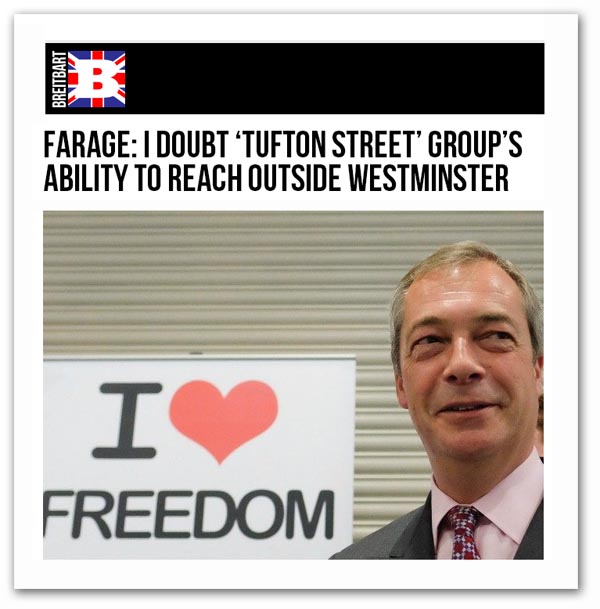 The battle for designation took on another twist on Tuesday with the publication on Conservative Home of a self-serving eulogy from Mark Wallace, about his former boss Matthew Elliott, stressing his suitability to lead the "leave" campaign.

About the same time, we were criticising John Springford of the Centre for European Reform for not declaring a financial interest when propagandising about the Norway option. It is only fair then that we should note Mark Wallace was telling us that:

… it should be clear which organisation is best equipped to lead the Leave side. That organisation is the Elliott/Cummings campaign, and as long-standing supporters of Brexit we look forward to its launch

… without him disclosing his relationship with his former boss, and that they are very close friends and associates.

The omission brought a sharp rejoinder from Peter North - and deservedly so. There is no reason why Wallace should not speak up for Elliott, but not to declare his relationship is underhand.

Mind, the very fact that the eulogy appeared on Conservative Home says something. The website is part of the Message Space nexus, the operation set up by Paul Staines (of Guido Fawkes notoriety), and Jag Singh. Both are close friends of Elliott, and were co-investors in his Wess Digital enterprise, as charted by The Boiling Frog.

It is also the case that after Elliott had taken over the reins of the No2AV campaign, he appointed his friend and business associate Jag Singh as Digital Director, who then appointed Message Space - the company in which he had a financial interest - as the campaign's digital agency.

Singh himself was awarded over Ł30,000-worth of contracts in the immediate run-up to the ballot in May 2011 - paid to a Hong Kong bank - and Message Space was paid over Ł65,000, which including on 5 May – days before the poll – the biggest 1-day-blitz online ad buy in UK political history. One should note that Conservative Home - then under the proprietorship of Tim Montgomerie - was a major beneficiary.

After the campaign, it was interesting to note that Montgomerie awarded Elliott the accolade of, "probably the most effective political campaigner that Britain has produced in a generation". That was despite his having brought the No2AV campaign so close to the brink of disaster that it required the direct intervention of the Prime Minister to rescue it, thereby nearly achieving the impossible - losing an unlosable campaign.

Given past form, though, it now stands to reason that if Mr Elliott captures the much larger franchise for the EU "leave" campaign – worth up to Ł7 million – his operation could be similarly generous in rewarding its friends and associates with contracts and purchases. Con Home, in this event, might expect to gain additional advertising and cannot, therefore, be considered an entirely neutral player.

Responding to Con Home and Wallace, however, is a champion of Elliott's potential nemesis, Arron Banks, a man by the name of Raheem Kassam, editor of Brietbart London. Not a natural ally of this blog, he expresses himself in such terms that even Peter ended up defending him.

Kassam, at least, declares an interest: Wallace at one time got him a job at the Tax Payers' Alliance and he even got along with one of his best friends, Matthew Elliott. But, says Kassam, "as is the way with these things, if you don't play by their rules, they disown, disassociate, and all basically just diss you all round".

On the receiving end of this, Kassam claims to have been "far too often", and asserts that Arron Banks, UKIP and the Leave.EU campaign are now their main targets. And Wallace's piece, Kassam asserts, "is a very thinly veiled attempt to prompt people the way of Elliott's floundering Business for Britain campaign, which has aligned to it, the Conservatives for Britain, and Labour for Britain".

Elliott's campaign, Kassam believes, is haemorrhaging financial support – and is nowhere near the size of Leave.EU. "To be struggling financially with a skeleton staff", he says, "isn't exactly promising". Meanwhile, Banks is said to have a 50-person staffed call centre, as well as a fully fledged operation in place, with suggestions that he's spending just shy of half a million pounds a month.
Bundling Elliott in with Dominic Cummings – a man who Elliott regards as one of his mentors - Kassam challenges Wallace's claims of them that they are "officially and decidedly for leaving the EU". Still up on the BfB website, in its FAQs section, he says, is the declaration: "Business for Britain is absolutely not about leaving the EU".

Of even more concern to some is the statement recorded by Isabel Oakeshott of the Evening Standard on 1 June this year. Elliott's Business for Britain is said to be encouraged that even hardcore federalists such as Jacques Delors and Giscard d'Estaing talk about the UK having "associate" status. "If the Government gets a two-tier Europe, we're very much in", Elliott said then.

However, Kassam and, in another Breitbart piece, Farage, are missing an important point. Business for Britain is not going to lead the "leave" campaign. Rather, Elliott has a separate company, the No Campaign Ltd, which he can use as the platform for an entirely new operation.

As such, Elliott can shed inconvenient BfB baggage, such as his statements on not leaving the EU. Like a moth emerging from its cocoon, he can metamorphose into a squeaky clean "leaver" – if that is what is needed to get Electoral Commission lead designation. If he gets it, he can operate with a budget capped at Ł7 million, instead of the Ł700,000 allowed to other (non party-political) registered campaigners.

Nevertheless, Farage questions whether, what he calls the "Tufton Street group", can "reach out beyond Westminster", not realising that Elliott is now a born-again leaver. And, having vacated Tufton Street and his job as CEO of Business for Britain, he now operates out of Westminster Tower on the Albert Embankment, the same site he used for the No2AV campaign.
The Ukip leader is similarly behind the curve in complimenting Elliott for having good research staff, wrongly crediting them "with getting Tories to force a government U-turn on the purdah rules". It was one of this blog's readers who spotted the problem and this blog which raised the alarm, providing the research for Owen Paterson, who made the initial running in early June.

Typical of Elliott's style, though, he comes in after the event, with a fraction of the information and a limited grasp of the issues, to claim the credit. Typical of Farage's style, he falls for the hype.

But there's the big problem with Elliott and his "SW1 crowd". Assiduous in talking up their reputations and excluding outsiders (while stealing the credit for what others do), they are out of their depth when it comes to the EU. Dangerously, they have not the first idea of what constitutes a winning strategy.

And why he might not be as spectacularly incompetent as Arron Banks, all Elliott has shown in his earlier activities is that he has a grasp of basic tactics - even if he is someone pedestrian in their application - and has some management skills. He has never had to demonstrate that he has any grasp of the strategic needs of a "leave" campaign, and his offerings so far have been feeble. Furthermore, there is no one around him capable of giving him the advice he needs – not that he would understand it if given.

For my part, I look upon this growing train-wreck situation with dismay. Along with Peter, I take the view that Arron Banks is unlikely to deliver an effective campaign unless he substantially ups his game, which leaves the media and others – including Mark Wallace - arguing that Elliott is the only game in town.

But there is the Referendum Planning Group (RPG), made up from the Bruges Group, the Campaign for Independent Britain and others, including this blog. And while I am prepared to work alongside any organisation genuinely intending to fight to leave the EU, pursuing an application for lead designation through this group begins to look increasingly attractive.

Before that, it seems that we have to go through the Raheem Kassam's experience, finding that, "if you don't play by their rules, they disown, disassociate, and all basically just diss you all round".

The thing is, having voted "no" in 1975, I have committed too many years of my life to opposing the EU to allow Johnny-come-latelys, with a fraction of my skills and understanding, to dictate the terms on which I will fight. Most certainly, I will not be excluded for refusing to take directions from an organisation headed by a man who is manifestly not up to the job, but is up to his neck in what appear to be very dubious practices.

Come what may, I am part of this battle, and no one is going to decide otherwise. This blog, with its allies in the RPG, is a powerful weapon in the armoury. And I think I can validly use the term "we" when I say that we intend to see it used to maximum effect.