EU Referendum: a matter of accountability 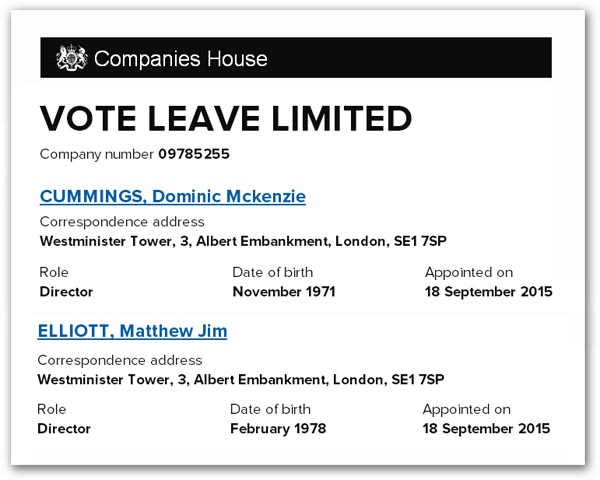 No sensible person, intent on fighting an effective "leave" campaign in the EU referendum, can look upon recent events with anything other than dismay. But, while we would all like to see the anti-membership forces lined up and unified, wishing things were different isn't going to make it so.

Bluntly, it is little short of childishly naive to expect the different groups to collect together under one umbrella, and "play together nicely", so that we can beat the big bad Europhiles, riding off into the sunset and living happily ever after.

The fact is that there are rival groups in play because there are different agendas - by no means all the players are honourable, or with good intent. And, in the absence of unity, the choice of a lead group is most likely going to have to be made by the Electoral Commission. Two or more groups will walk in, but only one will come out.

In many respects, the outcome of that battle is as important as the referendum itself. This cannot be simply put down as "infighting", with the different parties described as "splitters" after that now over-worn Monty Python sketch.

As I have written before, at stake is the heart and soul of the "leave" campaign. Determining which group takes the lead is, at this stage, far more important than any public campaigning. And while neither of the two big players so far declared are particularly attractive, there are sound reasons for not accepting the credentials of the Cummings/Elliott duo and their "vote leave" campaign.

Not least, as we see from the Companies House record, Elliott and Cummings have turned their campaign into their own private property, having registered it as a company of which they are the sole directors. In this, Elliott has form having pulled a similar trick with the NotoAV campaign, registering the operating company as the No Campaign Limited, of which he was one of three directors (later to become two).

It really cannot be acceptable to have this sort of structure for a high profile political campaign, where donations are being solicited, and potentially tens of millions are being spent on influencing an important element of public policy. This should not be treated as a private business opportunity by a couple of opportunistic entrepreneurs.

In this type of operation, one might expect an independent, oversight board, with directors not directly involved in the day-to-day management of the campaign, charged with auditing the spending and management. Transparency and accountability are crucial elements, and both are almost entirely missing.

That said, an important part of the accountability process is public debate. Already the "vote leave's" insistence on profiling EU costs, in a lacklustre video, is being challenged. The case is unravelling even as we write. In particular, the Ł20 billion claim is a gift to the likes of Hugo Dixon who makes easy meat of the arguments.

Dixon actually argues that gross contribution after deduction of rebate is Ł12.9 billion (2014-15). If we then take up the Norway option, our total payments on a per capita basis for market access, services and the solidarity fund, would come to about Ł7 billion. We would also have to find payments for agriculture, rural policy, fisheries and regional policy, amounting to another Ł3 billion and bringing our annual payments to about Ł10 billion.

That would mean that our annual net savings – in terms of redistributable funds – would amount only to about Ł3 billion – assuming that we get a favourable deal out of Brussels and they don't demand compensation for us leaving the EU (in the same way that payments for contract termination are often demanded).

Therefore, the savings cited by "vote leave" are grossly overstated. For that reason, privately, I advised Cummings about using the cost argument, warning him that it could backfire. Yet he was insistent on using the figures, on the basis of poll results indicating that the "switch group" in the C-Ds were heavily influenced by EU costs.

What he didn't factor in was that high-profile claims would immediately provoke high-profile contradictions, ending up in a situation where Channel 4 observes that it "may be impossible to settle the economic argument before the referendum".

This is just what we needed to avoid, and if the opposition can question Cummings's use of the figures, I am not going to accept that I should be excluded from that debate – not allowed to question his strategic acumen. Some may want to call my intervention "infighting" but it is, in fact, a simple manifestation of the doctrine that we must be our own sternest critics. We do ourselves no favours by keeping quiet about flaws in our own campaign strategies.

Interestingly, the justification for this is to be found in an Independent headline, proclaiming: "EU referendum: Phoney war will continue until we see what EU deal Cameron can strike". The battle, it says, "could last for two years, and the public will not engage until late in the fight".

These are exactly the points I have been making for some time now. We are in for the long-haul. The battlefield hasn't been defined, and the battle has yet to be joined, so opinion polls have very limited value. Cummings, apart from anything else, has been over-interpreting the data.

But if we are being confronted by prima donnas, for whom being above challenge is more important than getting it right, then we have little option but to go public. If we don't sort out our campaigning strategies now, the prediction by the Independent will become a self-fulfilling prophesy. The two camps "will exhaust themselves as they make claim and counter-claim", it says. They will "probably fail to land a knockout blow and slug out a draw, before the voters deliver a points verdict that could be very close indeed".

This is a newspaper's take on a strategies that we can already see carrying a high risk of failure. And when we see the Spectator is only too keen to endorse them, on behalf of the "vote leave" campaign, we know that this is something to avoid. It would help, of course, if the magazine revealed it has a financial interest in the designation outcome, standing to gain advertising revenue from the Elliott camp.

Nothing, therefore, is quite what it seems. But as long as we have incompetent, self-serving campaigners – who have the capability to do more harm than good – accountability must come before personal ambition.

Getting it right is our most important priority, and there is far too much at stake for us to take a different view. And we are very far from being alone in asking whether Matthew Elliott is an appropriate person to lead the official "leave" campaign. We need better than anything he and his Second Cummings has to offer.