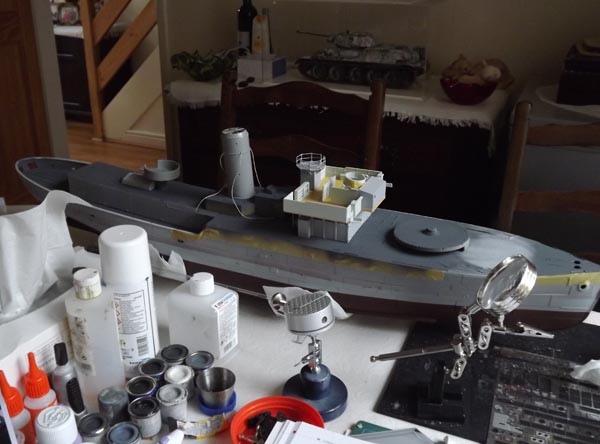 I have to admit to slacking over the weekend, as another project briefly took precedence. In a moment of madness – knowing that his uncle commanded the ship - I offered to make a model of the Flower Class corvette, HMS Poppy, for Booker's Christmas present.

As work progresses (pictured above), I'm remembering why I don't make ship models, and more so this particular one. An old Revell mould, re-issued, many of the parts don't fit properly and there are major inaccuracies, all of which require remedial work on the back of laborious research.

Add to that, all I have is a couple of blurred wartime photographs to work from, to make the modifications that are not in the original kit, and I'm beginning to think that I've bitten off more that I can chew. It'll be finished for Christmas, but I'm not prepared to say which one at this stage.

Howsoever, the process of model-making is so very different from the referendum campaign that it provides a very necessary contrast, helping to clear my mind in order then to focus on the essentials, and penetrate the fog of war.

This is going to be increasingly necessary. If, as the evidence strongly indicates, we have nearly two years to run before we go to the polls on the EU referendum, this becomes a test of endurance. We have to pace ourselves, so we still have the energy and the interest to see the battle right through to the end.

As such, the very last thing we need to be doing is attempting to run a high-profile public campaign at this stage. Instead, we should be using the time to devise and hone our strategy, to recruit the right people to help execute it, and then to train them in the fundamentals, so that they are properly equipped to do the job.

Crucially, we must then work on the assumption that, once the campaign nears its end, and the real opposition – Mr David Cameron and friends – reveal their hand – the media will fall in behind the "remain" proposition, along with all the main political parties (with the exception of Ukip).

It follows that, in order to get our message out in the final stages – when it really counts – we must have our own communications system, independently from the legacy media. This, we are going to have to build, almost from scratch.

As for the campaign so far, we are assailed by the closed minds of "Vote Leave Ltd", prop Dominic Cummings and Matthew Elliott, and "Leave.eu", run by Arron Banks. For a variety of reasons, Banks has become our best hope for an effective campaign.

In my discussions with the man, he admits that his operation is scrappy but he is prepared to listen to criticism, without rancour. To improve matters, he has hired US referendum guru Gerry Gunster to work up a broader strategy, into which the campaign activities will fit.

Where Banks also differs is in being very focused about immediate priorities. Unlike the bulk of the media and the presumptuous Open Europe, which thinks it can frame the debate, he is under no illusion that the first crucial battle is to secure lead campaigner designation from the Electoral Commission.

Whatever the failings of his operation, there can be no doubt that the game is over if "Vote Leave Ltd" wins the designation. With Elliott asserting that the referendum is simply a ploy to get a "better deal", even if we actually won, we would lose.

More specifically, there can be no trust in any organisation that has so muddied the waters, and where its directors are potentially set to make millions out of the data mining opportunities afforded by running a national referendum campaign.

Thus, strangely – without the media or other noisemakers acknowledging it (and many being unaware of it) - there is a close-fought battle in progress, the outcome of which will determine whether we even have the possibility an honest campaign on the "leave" side.

That is not to say that "Leave.eu" will be any more competent, or that the RPG will not move in and gain the designation, but what it does suggest is that the broader campaign is of little relevance until this matter is resolved.

Then, but only then, will the emphasis need to change. We need to be aware that this contest is unlikely to be about the EU. As so often in referendums, the question on the ballot paper is unlikely to be the one that voters answer. Most probably, they will be addressing the question of whether they trust the Prime Minister to deliver a new relationship with the EU.

Such framing will make Mr Cameron the central protagonist in the fight, and the main target for the designated "leave" campaign. The official "remain" campaign will be (and already is) an irrelevance – a distraction from the core issue, of whether Mr Cameron can deliver.

That makes "Vote Leave Ltd" an even more dubious proposition. Even in the unlikely event that it could surmount the hurdles of trust and competence, it would have to make Mr Cameron its main target, in what will have to be a very personal attack. And, as the man says: "not going to happen".

Thus, we are committed to that "hidden battle", the one that we must win before we even get to close with the real enemy. For the moment, this is the one that matters.