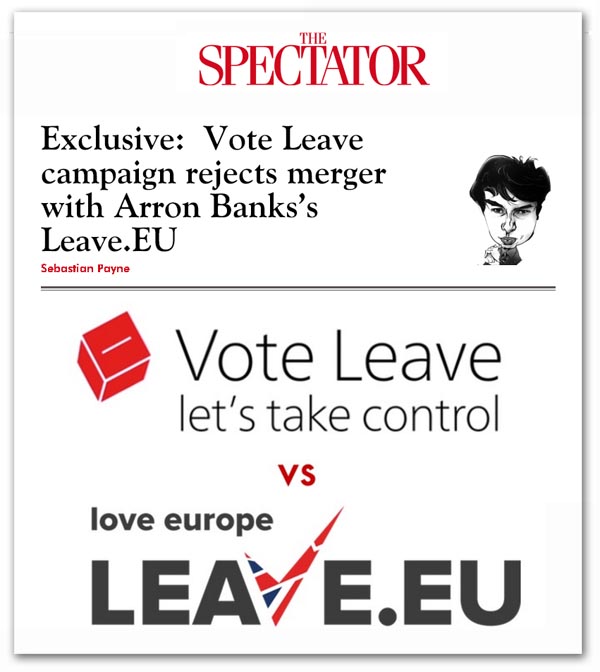 Probably one of the most difficult things for the enthusiastic "leave" campaigners to come to terms with at present is the irrelevance of the "remain" camp, better known as the "BSE" campaign.

Led by Lord Rose, this is the pantomime horse of the referendum campaign, there as entertainment and as a warm-up act for the main event, until Mr Cameron takes the stage. To characterise this as "the first big battle", therefore, is a tad hyperbolic.

But then "Vote Leave Ltd" has to ramp up the action to justify its six-figure monthly overhead and keep the money flowing from its sponsors. To get their friends in the Spectator to talk up the action serves the purpose, a task made easier by Cummings having his wife on the staff.

As I wrote yesterday, though, the main battle is elsewhere, and yet to be fought out. But anyone who read my piece might be perplexed by this report on the magazine's website, apparently contradicting what I have said.

The gist of this is that Arron Banks, he of "Leave.EU" has been in "talks" with "Vote Leave Ltd", prop. Dominic Cummings and Matthew Elliott, "about how the campaigns can work together better".

We are then told by Spectator's Sebastian Payne that "sources close to Arron Banks" have said that he is open to the idea of merging with "Vote Leave Ltd" and "taking a lower profile role" in the campaign. This is supposedly based on Banks acknowledging that "the infighting is harming the Eurosceptic cause".

Payne then elaborates on this, informing us that "Leave.EU" campaigners recognise that Dominic Cummings as a "genius" with whom they would "love to be working".

The sticking point, writes Paynes, "appears to be a personality clash between Banks and Elliott. Until the pair can work out their differences, "Leave.EU" can't envisage any kind of "coming together".

The interesting about this narrative, though, is it relies on "sources close to Arron Banks". When asked directly about this story, however, Arron Banks referred to a grape-like assembly of spherical objects associated with reproduction. "Nothing in the article", he said, "is correct".

From the other end, we also get an interesting response. The Elliott-Cummings operation also denies it is about to merge with Leave.EU. People who will make up the "board" of Vote Leave - a mix of senior businesspeople and key MPs - have vetoed any talk of a merger.

One senior Conservative "close to the Vote Leave" campaign says that the donors have said there is no chance of a merger:

They regard him [Banks] as a total liability and nobody serious wants to have anything to do with him. His campaign is owned in an offshore company. His director of communications is also the Belize trade representative in London. They antagonise everybody they deal with. Serious people won't touch him with a bargepole

And there's that arrogance again – that "born to rule" arrogance we get from these "leaders of men" who presume they are the only ones suitable to run the "leave" campaign.

For the Spectator, there's another issue. It is completely misreading the situation. As we remarked earlier, this is not "infighting".

At stake is the heart and soul of the "leave" campaign. Determining which group takes the lead is, at this stage, far more important than any public campaigning, and if the wrong group wins the designation, then we have lost before we even start.

There is going to be no merger. This was never on the cards. Of the groups that walk into the room, only one will walk out with the lead. Winner takes all.