EU Referendum: bring on the debate 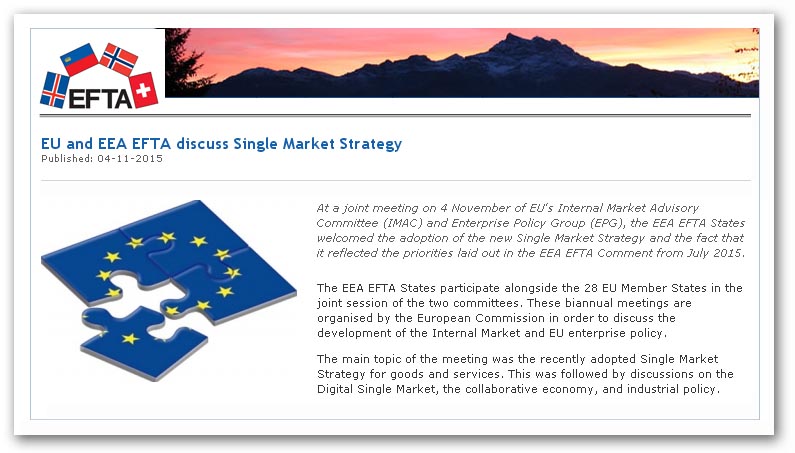 Given his track record on such things, it came as no surprise to have our Prime Minister openly lying over the Norway (Interim) Option. But what still takes some getting used to is that the "high-noise" leavers, Vote Leave Ltd and Leave.eu piled in to disown the option and this endorse his dismissal, while not even attempting to address the lies.

What then happened was that both campaigns retreated to their comfort zones. Vote Leave Ltd revisited old battles, fought and won with the CBI over the euro, while Leave.eu indulged in a private spat with the BSE campaign, both of the groups thus continuing with the policy of opting out of the mainstream debate.

The irony of this all is that Norway and with it the rest of EFTA – claimed by David Cameron to have "no say" in the making of rules for the Single Market – went on to conduct a joint meeting of the EU's Internal Market Advisory Committee (IMAC) and Enterprise Policy Group (EPG).

At this meeting, the EFTA/EEA States welcomed the adoption of the EU's new Single Market Strategy, published at the end of last month., and the fact that it reflected the priorities laid out in the EFTA/EEA Comment from July 2015.

So, the very thing that the British Prime Minister was claiming was in a matter of days, being unravelled by events. The EFTA/EEA states were doing the very thing they were said not to be doing: having their say. Not only that, they were doing what the "leave" groups were not doing, but should have been.

Furthermore, while we have been demanding that the "remainers" tell us what continued EU membership looks like, this to an extent is happening here. Aided by the EFTA/EEA states, the Commission is looking at the future of the Single Market over the next few years.

This is via COM(2015) 550 final, published on 28 October of this year, entitled "Upgrading the Single Market: more opportunities for people and business", which sets out a "vision" for a "deeper and fairer Single Market".

The usual penchant for rhetoric comes to the fore, as the Commission tells us that it wants a news strategy based on "opportunity, modernisation and results", to which effect the Single Market "needs to be revived and modernised in a way that improves the functioning of the markets for products and services and guarantees appropriate protection for people".

The strategy, we are led to believe, is made up of targeted actions in three key areas: "creating opportunities for consumers, professionals and businesses; encouraging and enabling the modernisation and innovation that Europe needs; ensuring practical delivery that benefits consumers and businesses in their daily lives".

Reading through the modest 22 pages of the document, what is striking is not so much what it says but what it doesn't say – its timidity and limited scope. It is essentially a European document and, although there are references to TTIP and the need to secure "an ambitious, fair and effective outcome" to the US talks, that seems to be the limit of the Commission's ambitions.

The measure of this is startlingly few references to global issues. "We need a Europe that is open to the world and a world that is open to Europe", says the Commission, without the least detail as to how this should be achieved. Nowhere is the term "globalisation" to be found.

Significantly, the WTO is celebrating twenty years of the TBT Agreement, which entered into force with the establishment of the World Trade Organization (WTO) on 1 January 1995.

This heralded a revolution in global trading, the importance of which has scarcely been recognised. Outside the narrow confines of "little Europe", there is a global market in the making and the European Union is not taking its full part in it.

The lack of vision we are getting from the Commission, though, is being mirrored elsewhere, and in particular in an article in Euractiv, where we see Stuart Brown, a researcher in European politics at the LSE, tells us to "Forget Norway", arguing that: the UK needs a "proper debate on the single market".

This lightweight and dishonest piece has been partially explored by Pete, but there is a more fundamental point to be made.

Yes, we need a debate. And it does need to be about the single market - but it needs to be much wider than just the limited vision the encompasses the EU's single market. We need to be thinking about a global single market, and how to make it work more efficiently, with increased transparency and accountability.

This is a debate which the EU is avoiding. It is one which the "remainers" are hiding from and it is one, remarkably, from which the high-noise "leavers" are running. Yet, for the leave campaign at least, as White Wednesday points out, it is our strongest suit and the battlefield on which we need to fight the referendum.

In this, we need to go past the familiar mantras about being a global trading nation, and get to grips with the extent that globalisation is already dictating how we trade – how it works, its successes, it failures and the obstacles ir faces.

If we can have that debate – an adult debate, in which the legacy media is incapable of partaking – then we will be a long way towards understanding the issues which will help us craft our winning hand. For the moment though, we're being drowned out by the noise. It would be start if the noisemakers toned it down a bit, even if they also incapable of joining the debate.