Strategy ten: engaging with the enemy 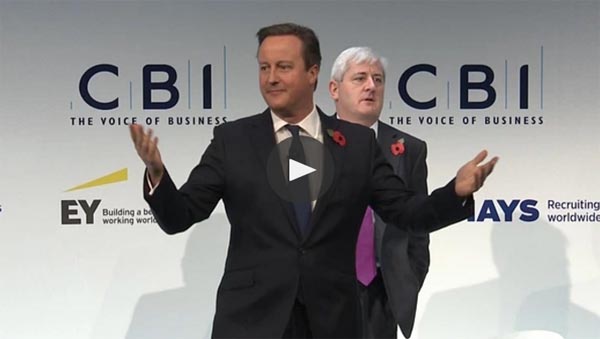 In this first post of our series on EU referendum strategy, I promised to revisit the nature of strategy, and discuss why it is so important. And there is no better way of doing this than to look at current events, to give us a topical note, from which we can draw the necessary lessons.
Let's start with the Prime Minister's speech to the CBI yesterday. The childish interruption, organised by the equally puerile Vote Leave, has absorbed much of the media attention, but fortunately we have a transcript with which to work. The actual speech can be heard on the CBI website.

Initially, David Cameron tells us he's "not firing the starting gun on the referendum campaign", perhaps a sideways dig at the idiot Times, which yesterday ran a front-page story claiming that he was ready for the "gamble" of a June (2016) referendum.
I thought, incidentally, we had got over this hump of stupidity, but there is absolutely no bottom limit when it comes to the British media. It seems to regard depths as things to be plumbed with untrammelled enthusiasm.

Back with Cameron, what he then does is lay out what amounts his strategic vision, starting with this extraordinary statement:

… what I have done in recent weeks is just to debunk some of the duff arguments that people put around. So last week I talked about what I think is a very duff argument put about by the Out campaign, which is that it would be easy for Britain to leave Europe and simply sign up to a deal like Norway. I think that would be a bad idea. When you look at the detail of the deal that Norway has, it is not a good deal. They pay more per head into the European Union than we do, they take more migration than we do, and yet they don't have a seat at the table to determine what the rules are. So that is a bad deal. So the people who definitely want to leave, they need to come up with a better argument than "let's have a position like Norway".

Never mind here that Cameron is adopting the technique of repeating the lies. What he has done is create one of two extremes of an argument, thereby creating the centre ground which he can occupy. The second extreme comes with this:

So today I also want to debunk an argument that is sometimes put around by those who say "stay in Europe come what may". Some people seem to say that really Britain couldn't survive, couldn't do okay outside the European Union. I don't think that is true. Let's be frank, Britain is an amazing country. We have got the fifth biggest economy in the world. We are a top ten manufacturer, growing steadily strong financial services. The world wants to come and do business here, look at the record of inward investment. Look at the leaders beating a path to our door to come to see what's happening with this great country's economy.

This has been misread by much of the media, which has taken this statement in isolation, using it to signify a hardening of resolve. But it is nothing of the sort. The Prime Minister is creating his middle ground. On the one hand, there is the insulting characterisation of the "duff argument" about Norway. On the other side, there are those who want to stay in and argue that Britain couldn't survive outside the EU. Into the space created walks the moderate Mr Cameron. He tells us:

The argument isn't whether Britain could survive outside the EU; of course it could. The argument is, "How are we going to be best off?" That is the argument that I think we are going to be making together after this successful negotiation. When it comes to the crucial issues, our prosperity, our national security, of course we could try to look after those things outside the EU, but how do we make ourselves more prosperous and more secure? That's what the argument should be about, and that's what I will throw myself into once I've completed this negotiation.

And I hope that British business will back me in this negotiation because, frankly, the status quo isn't good enough for Britain. We need to fix these challenges, fix these problems. That's what the negotiation is about and then we can throw ourselves headlong into keeping Britain in a reformed Europe. But as we do so, no duff arguments, no pretending that Britain couldn't survive outside the EU, of course we could. The fifth largest economy in the world, the great economy that is getting stronger and better.

And this is exactly what the Independent saw, which I reported on over the weekend. This is Mr Cameron's "middle way", the full extent of which he is yet to reveal but which we expect to morph into associate membership. He is conscious of the problems of the EU, so he is going to "fix these challenges, fix these problems".

For us, this is dangerous. He is not attempting to appeal to either extreme - he knows they have fixed positions. Instead, he is appealing directly to the "moderate middle" - Mr Reasonable - all the more so for his deft handling of the schoolboy interruption.
Bizarrely though, the "high-noise" leavers are oblivious to the danger. Dominic Cummings, the "mad genius" of euroscepticism, even seems to think that Cameron does not have a strategy, "DC doesn't know his goals" and "doesn't have a strategy", he tweets.

But, despite Cummings's strategic myopia, what we saw yesterday is a classic example of political strategy in action. There is a clarity of purpose and a clear theme, which had Mr Cameron telling his audience that once the negotiation is concluded, "we can throw ourselves headlong into keeping Britain in a reformed Europe".

From the very start, the Prime Minister has never wavered from his twin goal. The first is one of forging a new relationship with the EU. As for "reform", what he has in mind is what the "colleagues" have suggested to him: to split the Union into two tiers. This is what he might be calling an "arms length relationship", but the idea of creating a new relationship was there, in the Bloomberg speech.
The second goal, dependent on the first, is to keep Britain in the EU. Again, Mr Cameron has been totally consistent on this. He could not have made it more clear.

And this is where strategy pays off – you state your objective, and then you focus on how to get there. This is what Mr Cameron is doing. We need to do the same thing. Furthermore, it is vital that we understand the difference between the "goal" or "objective", and the strategy - the roadmap. In Mr Cameron's case, we know his goals. Our goal is more modest at this stage – simply to win the referendum. But what is our strategy – our roadmap for the campaign?

Here, we can refer back to Gene Sharp, whom we looked at in July and Pete looked at yesterday. But, what came out in the comments to my piece was that there is something even more important than our own strategy. The key to this whole campaign is the enemy's strategy.

In the context of this referendum, it is also vital to recognise who the enemy is: the Prime Minister. He is our enemy - not the patsy "remain" campaign, or the CBI - against which the thoroughly "mad" Mr Cummings has decided to declare war.
In this war, it is Mr Cameron who has the initiative in so many areas that, inevitably we must respond to him. Our core strategy, therefore, has to be reactive, and it has to be intelligence-led. Our key task is to identify as early as possible the nature of Mr Cameron's strategy, then to devise effective responses. Where possible, we must pre-empt his moves.

The essence, therefore, is as I set out at Leamington Spa. There are three stages to our strategy: we must identify the threat; we must neutralise it; and then we must mount a counter-attack. Three things, and in that order.

Earlier than anticipated, we have a very clear idea of Mr Cameron's intentions. We have been lucky in the that, with him having signalled his intentions so early. We now have an obvious task: to make it clear that the "arms-length relationship" is the worst of all possible worlds. It then remains for us to project our own alternative, something far better than anything the Europhiles can offer. That must be the substance of our counter-attack, the third prong of our strategy.

This, though, is only the bare bones. We also have to look at the detail. While each war has a strategy - the so-called "grand strategy", each battle is defined by its own subordinate strategy. Here, it is important to retain a sense of hierarchy. The battle strategy - whether indeed you fight the battle - is subordinate to the grand strategy.
But our subordinate strategies must include such matters as how we should project our messages - what one might call the communication strategy. We should know to whom we must deliver the key messages, and how they must be delivered in order to change minds.
Above all else, with the noisemakers having lost the plot - off fighting totally irrelevant battles of their own - we are terribly short of resource. Therefore, we cannot afford is to dilute our effort with activities unrelated to the strategic direction. We certainly can't afford the wild antics that Mr Cummings has in mind. All they will do is damage our authority and credibility.
If we do not plan strategically, says Gene Sharp, we are likely to fail to achieve our objectives. A poorly planned mixture of activities will not move us forward. Instead, it will more likely strengthen the opposition. And that is why strategy is so important. Without it, we might just as well be working for the other side. With Vote Leave Ltd, others are wondering whether that could even be the case.
We will look further at this problem tomorrow.