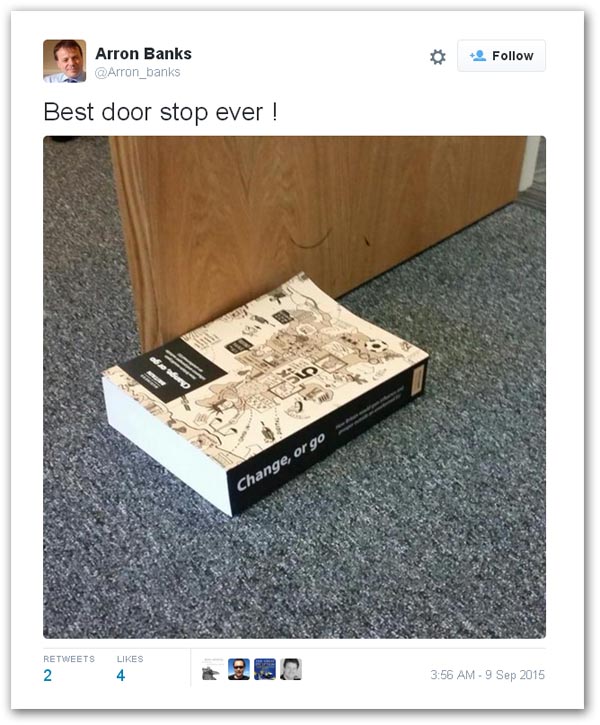 Backing up the Reuters report from Sunday, we now get the Financial Times informing us that Brussels has told Downing Street it must "finalise its negotiating position on EU reform within a week" if David Cameron is to achieve his goal of securing a deal by the end of the year.

Unless you know different, of course, there never actually was a formal intention expressed by Mr Cameron to conclude an agreement by the end of the year. The last I heard of any substance was at the end of September, when the scuttlebutt had it that the plan would be to reach an agreement by March next year, with a view to holding the referendum by the autumn of 2016.

That is actually just as unlikely as a referendum in the spring, but it does at least have the merit of being possible, unlike the earlier date, even if there is still speculation that an early referendum in June or July 2016 could be called.

However, as the months slip by, the original alarms about an early referendum are beginning to fade, although these will be replaced by intensifying speculation about a poll in October 2016, which will continue through into next year. Not a single journalist, as far as I am aware, has been able to join all the dots and argue cogently for a referendum in the autumn of 2017, which is still my expected option.

Needless to say, both the "big leaves" have committed to premature launches, both of them falling into the trap of expecting a early referendum, alongside Nigel Farage, whose strategic and tactical acumen is well known after his stunning success in the 2015 general election. We are so lucky now that he is applying his skills to fighting the referendum.

With all sides committed to a long campaign, though  even if most haven't yet come fully to terms that the referendum is going to be two years hence  it is not surprising that there are moves afoot to cut costs by merging the leaves, initiated in this instance by Arron Banks.

The Telegraph claims to have an exclusive on this, even though the Express posted the story earlier. Of the two papers, the Telegraph carries the fuller account, including the text of a letter sent by Banks to Matthew Elliott, self-styled CEO of Vote Leave Ltd.

Banks's obvious concern is that the two campaigns are replicating similar staffing at great expense and duplicated campaign structures that are vying for attention with the media. He thus writes: "It is time that we put all disagreements to one side and remember our ultimate objective  leaving the European Union".

However, the story was a short-lived one, not even lasting the day when the Spectator, amongst others, was telling us there would not be a merger.

There had been no talks and were not likely to be any, not least because there was some "disgruntlement" in the Vote Leave camp that the letter has been ended up in the public domain before its Board has met to discuss it.

There were also issues related to Banks personally: the Vote Leave campaign is wary of his close ties to Ukip and Farage, which may cause issues with the Electoral Commission designation as the official "leave" campaign.

Additionally, there were the "caustic remarks" about Douglas Carswell, when Banks had described the Clacton MP as "borderline autistic with mental illness wrapped in". With Carswell sitting on Vote Leave's Parliamentary planning committee, said the Spectator, "it's unlikely he will be endorsing a merger".

Surprisingly, nothing was said of Mr Banks telling us that the two campaigns have focused on very different things, with Vote Leave having produced "great technical analysis such as the 1,000 Page document, 'Change or Go'". This is somewhat different to what he was saying in September when he described it as the best door stop ever (pictured). Probably, he was right first time, but expediency makes diplomats of us all.

What was less forgivable was Banks tells us that his group has "hired the very best people in the world to run the strategy of the campaign with experience of over 30 referendums or issue-based campaigns worldwide". Their advice, we are told, "is that we need to run a positive, uplifting campaign, which focuses on the fact Britain could do so much better outside the EU". And this "is the message we have been pushing in our media activity".

Doubtless, this was well intended, but I wonder if Mr Banks can even begin to understand how insulting it is for him to bring an American "guru" over here to play back to us exactly that which I was writing in March 2011 and many times since - and then claim they are the "best".

But what is especially galling is that there is no sign whatsoever of Leave.eu actually adopting the advice from the "very best people in the world". A review of both the Twitter account and the website yields an unremitting diet of negativity  effectively one long whinge about the European Union.

On the other hand, through Flexcit and this blog, we have done everything in our power to promote leaving the EU in a positive light, as well as develop a strategy which can exploit our positive message. What's holding us back are the crass activities of the less well-equipped, who have not given a fraction of the thought we have devoted to the problem of leaving the EU, and are undermining the work we do.

Yet, we still find people on Twitter and elsewhere telling us that we should "work together" with this people as part of a unified campaign. We also get people who tells us that we should work with one or other of the leave campaigns. Yet neither have a message anywhere near as coherent as the one we have produced, and neither are able to unify, even internally.

When, most recently, I was told that we "have to work with the out camp"  whatever the "out" camp is - I decided I'd had enough. I thus wrote and posted on Twitter, a message for new recruits to the "leave" campaign. There were, I thought, "a few things need to be made clear". 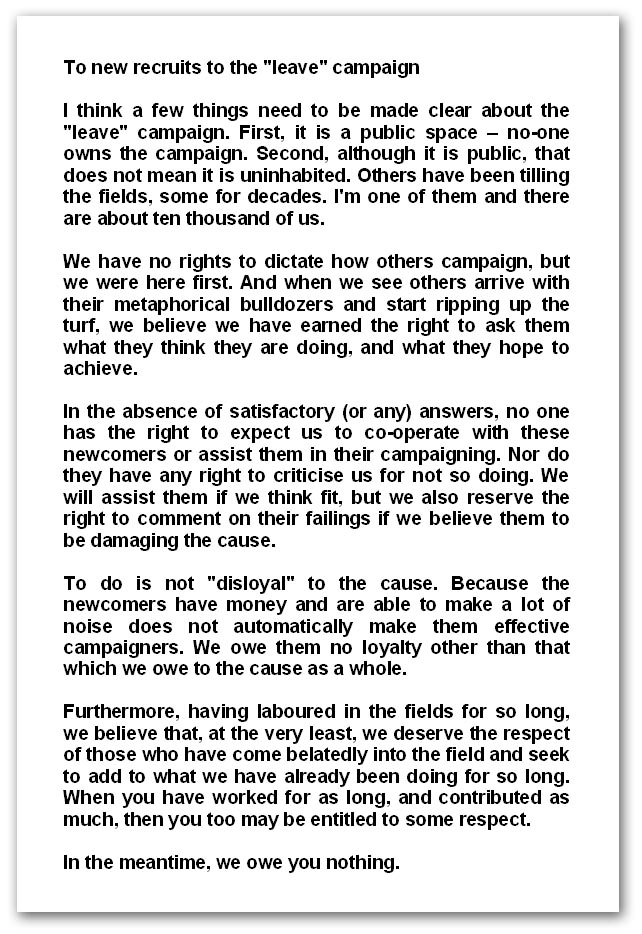 First, it must be realised that the campaign is a public space. No-one owns it. Second, although it is public, that does not mean it is uninhabited. Others have been tilling the fields, some for decades. I'm one of them and there are about ten thousand of us.

Nevertheless, I wrote, we ourselves have no rights over others to dictate how others campaign. But that works both ways. And it should be remembered that we were here first, which makes things a little different. When we see others arrive with their metaphorical bulldozers and start ripping up the turf, we believe we have earned the right to ask them what they think they are doing, and what they hope to achieve.

In the absence of satisfactory (or any) answers, I then said, no one has the right to expect us to co-operate with these newcomers or assist them in their campaigning. Nor do they have any right to criticise us for not so doing. We will assist them if we think fit, but we also reserve the right to comment on their failings if we believe them to be damaging the cause.

To do so is not being "disloyal" to the cause. Because the newcomers have money and are able to make a lot of noise does not automatically make them effective campaigners. We owe them no loyalty other than that which we owe to the cause as a whole. And blundering around the shop calling yourself a "leave" campaign is not a magic potion that renders you immune to criticism.

Furthermore, having laboured in the field for so long, we believe that, at the very least, we deserve the respect of those who have come belatedly into the field and seek to add to what we have already been doing for so long. When you have worked for as long, and contributed as much, then you too may be entitled to some respect.

In the meantime, I concluded, we owe you nothing. And that is not an unfriendly statement. Nor is it, as one pundit averred, "arrogance". That is such an easy charge to make - but no one dares to stand and justify it. They poop and run, like the cowards they are. Like or not, we are better than most of the workers in the field - because we have put the hours in, and we know what we're doing. To say so is simply to make a statement of fact.

As another matter of fact, throughout this long saga, I have been more than willing to work with other groups. I have gone out of my way to be helpful to anyone who asks for advice. We even went the extra mile with Vote Leave Ltd (at considerable expense to my self, freely giving help and advice). That fell apart when Cummings lied to my face about the group's intentions and then sought to close down my ability to express myself on this blog and elsewhere.
As to Leave.eu, I am still, after much stopping and starting, negotiating with Arron Banks and his team. And, as I have said on Twitter, "we'd be more than happy to have them work with us". "Unfortunately", I went on, "they don't as yet meet our exacting standards, although we're working informally to bring them up to speed".

That sentiment is not entirely tongue-in-cheek. Something like that must define our future responses. If anything, I have been too passive and apologetic about our relations with other groups. We work well with the CIB and with the Bruges Group and many others. The failure of some other groups to work with us is as much their fault as ours - if not more so.
For our part, we have put some brutally hard work into getting where we are, and we know what we're doing. While we would not even begin to claim that we have all the answers, and are constantly learning more, we are streets ahead of others. We have nothing to apologise for in demanding high standards of ourselves, or expecting others to work to those same high standards.

Effectively, therefore, if anyone wants to work with us, they have to meet our standards. We owe the campaign that much. And, as this remains a public space, we do not need any permissions from anyone to take that position. Nor do we have any reason to apologise for so doing.