EU Referendum: papering over the lies 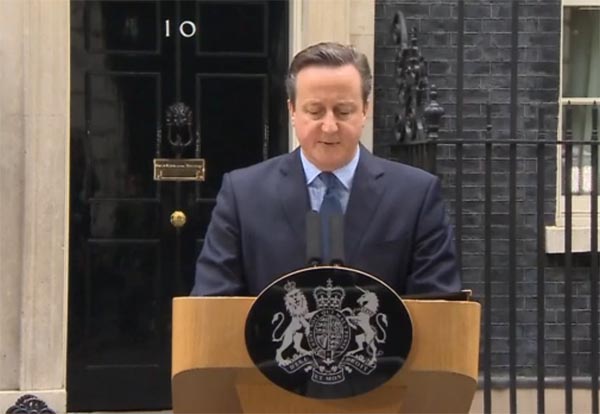 So, Mr Cameron says he has secured a "special status" for Britain within a reformed EU. He has done no such thing. His deal pretends to be legally biding but it is not.

He has cobbled together a pretend treaty combining a mish-mash of aspirations and political declarations, with no legal force whatsoever. Those parts which promise substantive change are dependent on treaty change at some unspecified point in the future, with no guarantees that they can be delivered.

Thus, the claim to have opted out of "ever closer union" - the federalist ratchet at the heart of the 28-country project – can have no legal effect until this future new treaty is in place. Likewise, the supposed safeguards on the eurozone are entirely dependent on this mythical treaty. They rest on clauses yet to be written by future leaders, which then have to be agreed and ratified by all 28-member states – and any others that may have joined in the interim.

The supposed "emergency brake" on welfare benefits is the ultimate confidence trick. Mr Cameron and the heads of state have simply re-cooked a 22-year-old provision written in the European Economic Area Agreement, fiddling with minor provisions in existing EU law which now need European Parliament approval and which can be overturned at a drop of a hat.

The "red card" is nothing but a hollow joke. It only applies to a fraction of the EU law book and can only be evoked on such narrow technical grounds, that even former Foreign Secretary William Hague joked that if the Commission proposed to slaughter the first-born, we would not be able to stop it.

Britain is still in just as much danger of being dragged along in the slipstream of the Continent's headlong rush to the formation of a new state that will crush what is left of our freedom and democracy. Having offered a new treaty in his 2013 Bloomberg speech, in which he first promised a referendum, and then promised a "full-on" treaty change, Mr Cameron has come back from Brussels with a pretend treaty which amounts to a fraud on the British people.

What this amounts to is the Prime Minister trying to cover up the brutal truth that he has made a promise which he can' t deliver. When he called for EU treaty change in 2013 during his Bloomberg speech, he had assumed (wrongly) that a new treaty was imminent. In fact, this had been proposed by Angela Merkel has already, the previous autumn, put it on hold.

Unaware of this, Mr Cameron thought he could go to Brussels and emulate the actions of his heroine, Margaret Thatcher, and "handbag" his way though the summit, demanding changes to existing treaties in exchange for approving much needed powers to manage the eurozone.

It was against that timetable that the then coalition leader set the timetable for the end of 2017 but, even by the time of his election victory in May of last year, it was already apparent that there could be no formal treat in the time set. Mr Cameron was already doomed. He was tied to a promise he could not deliver.

Since then, we have seen the dance of the seven veils, as the Prime Minister has sought to conceal from the British public this brutal truth, culminating in last Friday's charade when he pretended to have negotiated a "special status" which isn't worth the paper it's printed on.

Mr Cameron may have in his mind’s eye the image of Prime Minister Neville Chamberlain returning from Munich in 1938, triumphantly waving his "piece of paper" at Heston Airport (where the M4 service station now stands), but at least Mr Chamberlain’s "deal" bought us critical time, allowing us to re-arm sufficiently against the Nazi menace.

But this piece of paper is nothing but a fraud – a pretence. This Prime Minister has brought nothing back, nothing of substance, and is now intent on using is as the basis for a referendum where he is intent on selling his snake-oil "special status".

Yet, all the time, Mr Cameron's efforts have been a sideshow besides the main event – the real renegotiation under way to transform the 19 members of the Eurozone into a single state. That is the EU real agenda not the stage-managed drama of the Prime Minister emerging blinking into the light and announcing he has secured our future for a generation.

Nor should we assume that the Brussels barons will treat us kindly if we vote to remain in the EU. They will brush aside future British protests, telling us that we have had our chance to do things our way and rejected it. Our prospects sitting uneasily on the margins of the emerging superstate will not be promising. Unloved, ignored and marginalised, we face an uncertain, even risky future, on the outskirts of the new European empire.

This is why, on 23 June, we have to vote to leave the EU. To buy into Mr Cameron's pretence is to give him and successive politicians a license to lie. If as a people, we accept this garbage, we will take anything – and deserve what we get.