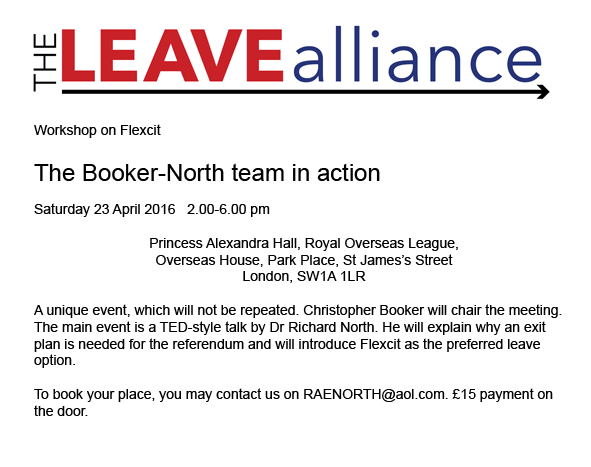 We're all set up for the big day at the ROSL. The programme is all organised, with an opening address by Christopher Booker, the TED-style talk on Flexcit from me, and then Question Time.
The question-time is one of the key elements of the afternoon. Unlike the typical "talking head" presentation, you the audience are the stars. We're looking for at least ten volunteers, each to ask a focused question, in a similar format. The questioner makes a short statement from the floor to introduce the subject, and then directs the question at the panel, comprising myself and Booker. We have a couple of guests ready to fill the breach on this.

Once we've chewed over the answer, the questioner gets a come-back, if they want it, and then we close on that issue and move to the next.  After editing, each becomes a YouTube clip, giving us a steady flow of material to post on the web.

From the feedback so far, we have these ten guide questions, which will be projected onto the screen for all to see. Questioners can either pick one of these, or use their own:
Throughout the afternoon, we'll have roving cameras, recording for vox pop contributions, with people responding to the simple question: "why do you want to leave the EU?" We'll edit and collate the responses, which will make for another, and truly historic film clip.

We aim to be finished around 5.30, but it may run to about six, for those who are able to stay. We'll rush the films out as soon as we can get them done – commensurate with maintaining professional standards.

If there are any queries before the event, you can e-mail me, and we'll have helpers on hand for when you arrive. We looking forward to seeing you all.