Transitioning into the unknown 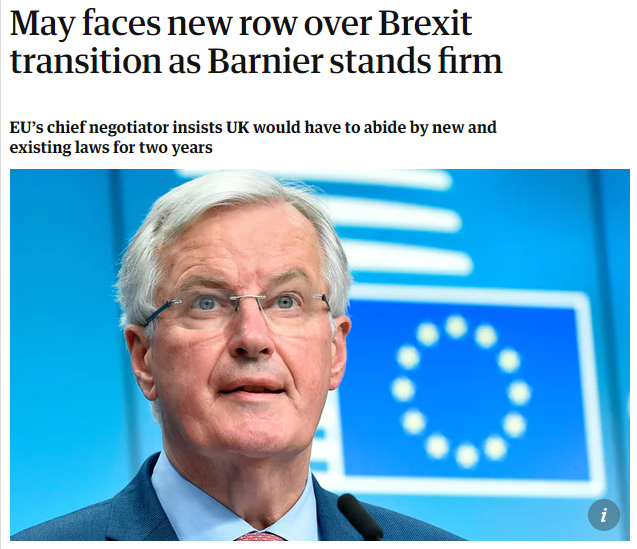 Theresa May faces a fresh row over how the Brexit transition period will work after the EU, in a press statement by Michel Barnier, said the UK would have to abide by all existing and new laws for a period of almost two years after leaving.

The EU position is very clear: the transition will last for 21 months, until 31 December 2020. During this limited period of time, the whole EU acquis will continue to apply to the UK. As well as the full EU supervision and enforcement framework, under the jurisdiction of the European Court of Justice.

This will include new EU rules entering into force during this period. For one simple reason: during transition, the UK will continue to take part in the Single Market, the Customs Union and all Union policies. It will continue to have all the economic benefits. Therefore it must also apply all the EU rules. The Single Market cannot be "ŕ la carte".

This will ensure stability for EU citizens in the UK and UK nationals in the EU. Their rights will remain unchanged until 31 December 2020. And we are determined to ensure that those who arrived before this date will benefit from the protection agreed in our Joint Report.

This will also ensure a level playing field and stability for businesses. They will not have to adapt twice. That said, it is high time to start preparing for those who have not done so yet. However, the UK will no longer be an EU member on 29 March 2019. This will have consequences in terms of institutions and governance. After this date, the UK will no longer participate in the EU decision-making process.

Finally, one word on existing agreements with third countries during the transition: As part of the transition, the UK will remain bound by the obligations stemming from all existing EU international agreements, for instance on trade and aviation. This is crucial for the good functioning of the Single Market and the Customs Union. And we can agree on this in the Article 50 Agreement between the EU and the UK. But we cannot ensure in the Article 50 Agreement that the UK keeps the benefits from these international agreements. Our partners around the world may have their own views on this, for instance the 70 countries covered by trade deals.

This has caused outrage from all the usual suspects but it was only a matter of time before the ultras kicked up a stink about the transition. We have known for some time now that it will effectively be continuity membership for it could be nothing else unless we were willing to extend Article 50. As to what can happen within that transitional framework, the limitations are largely dictated by the EU's own rules and those of the WTO. The only surprise, therefore, is that anyone is surprised.

The Guardian reports that EU member states took only two minutes to agree a negotiating position on a transitional period from 30 March 2019 and until 31 December 2020. That's the only interesting factor here. Such specificity on timing flies in the face of all conventional wisdom that a comprehensive deal cannot be concluded in such a short space of time. In that void hangs many questions in which we can only speculate.

Nick Gutteridge of The Sun is closest to the mark. "The EU is now just desperate for UK to put forward anything it can actually work with. Last Autumn there was a sense of irritation that we'd been harping on about trade but not come up with anything. In December, that developed into concern. It's now fast turning into panic".

In the absence of any serious proposal the EU will end up deciding for us drawing up guidelines for a basic FTA based on our red lines. It will take us at our word that we are leaving the single market, the customs union and ending freedom of movement. Says Gutteridge "Process will begin in less than 4 weeks if May doesn't produce anything. Feeling is UK's told us what it doesn't want, but hasn't (within bounds of realism) told us what it does".

That though presents both sides with a number of physical and technical challenges which raises the spectre of an actual implementation period following 2020 geared toward the UK becoming a third country, for which there is presently very little preparation coupled with a profound ignorance of what that actually entails. The lack of preparation could well mean that a basic FTA is only marginally less disruptive than a no deal Brexit.

Given the lack of engagement from the government, without an urgent rethink of our position we are certain to lose substantial market participation in aviation, pharmaceuticals, chemicals and all points between. What complicates matters is the preexisting politically binding agreement on Northern Ireland but the issue may yet be quarantined as a side process. Resolving that question is what brings the timing into question.

Gradually we are seeing the noose tightening and our options erased. The consequences of triggering Article 50 without a plan with only a skin deep understanding of how the system works are coming into full view. We are now seeing the penny dropping in certain quarters why we have pushed the EEA from the beginning. This should be an I told you so moment for us but there is no pleasure in watching this enterprise descend into farce.

What we are looking at here is the consequences of that toxic combination of Tory arrogance and certitude blended with weapons grade ignorance - which if harnessed in purest form could power an aircraft carrier. It is no laughing matter.