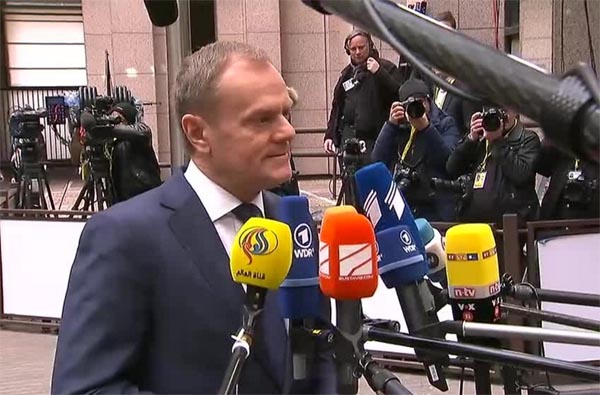 This is a make-or-break" (does he mean: "make-or-brake"?) "summit, says Donald Tusk - infected with newspeak. For the rest, we could have written the script as Mr Cameron declares he is "battling for Britain". This is tedious beyond measure.
Nevertheless, after a day's hard "battling", silence pervades the European quarter. The "colleagues" have reached an impasse, possibly a Freudian slip - that is the word the French use for a cul-de-sac. Have the talks have reached a dead end? If so, the only way out is back the way the way they came.
But, as we watched the play-acting unfold, the Guardian gave the game away with a piece telling us:

A failure to secure treaty change would mark a setback for the prime minister, who pledged last year to secure "full-on treaty change". Downing Street insists that an agreement among the EU' s 28 leaders would be "legally binding" and would be lodged at the UN regardless of whether treaty change is agreed.

Yet, such are the wonders of modern science and the silent edit that, by this morning, it had become:

A failure to underpin the reforms would represent a setback for Cameron, who pledged last year to secure "full-on treaty change". Downing Street insists that an agreement among the EU' s 28 leaders would be "legally binding" and would be lodged at the UN regardless of whether treaty change is agreed.

But they cannot edit reality. The one essential truth of this "renegotiation" is that Mr Cameron promised us a "full-on" treaty change.  And the one thing that Prime Minister isn't going to get is what he promised. What he's going for isn't a treaty. It isn't even legally binding. The Guardian got it right first time. This is a setback - a serious setback - for the Prime Minister.
It's worth reminding ourselves here that Mr Cameron did make this promise, twice - on BBC television. Here he is on the Marr Show on 11 May 2014.

ANDREW MARR: Let's talk about those changes then. You mentioned right at the beginning the importance of getting out of the clause, about an ever closer union, which of course in the Treaty of Rome says "of peoples", it doesn't say an ever closer union of parliaments or governments. That is the original founding Treaty of Rome which created the whole thing. Do you really think you can rip that up and start again? Do you think your colleagues in the European Union will allow that to happen?

ANDREW MARR: (over) So you could have an addendum to the Treaty of Rome saying this clause no longer applies to Britain?

DAVID CAMERON: Some of the things I'm calling for will require treaty change and

ANDREW MARR: (over) And that will be one of them?

ANDREW MARR: (over)  political union. I understand that, absolutely.

DAVID CAMERON: (over)  our country is the United Kingdom. And so I think this is  it's not just symbolic because actually the concept of ever closer union informs so much of what the European Union does.

ANDREW MARR: ... may I move on now to Europe, the other huge issue confronting you. So from what I can tell, you are no longer committed to a major, major reorganization of our relations with Europe, there's not going to be a treaty change, the changes that you were talking about are changes in benefits and changes at the edges, not to do with changes in the overall number of people coming into this country, and therefore you have pulled back a bit from what you were saying a year ago.

DAVID CAMERON: No, I don't think that's right, I mean, the changes are that we need are changes that are good for Britain and good for Europe, they do involve treaty change, er, and proper, full-on treaty change for that matter, but it's not...

ANDREW MARR: (over) In what areas, may I ask?

DAVID CAMERON: (continues) ... well, as I've said we need to get out of ever-closer union, that it something that shouldn't apply to the United Kingdom, we need parliaments to be able to combine, to block regulations, I think that is very important, we need guarantees that as the single currency gets more countries in it, the single market, which Britain remains in, is properly protected, and crucially on the question of immigration, we need these very big changes that I'm putting forwards to the welfare system, some of which will require treaty change, and so I think everyone can understand these, under the proposals I have, if someone comes to Britain from Europe, looking for a job, they don't get unemployment benefit, if they don't have a job within six months they have to go home, they have to work for four years before they have paid in enough to the system in order to claim things like tax credits...

ANDREW MARR: (over) These seem relatively popular, but...

DAVID CAMERON: ...and also crucially, you don't get child benefit in respect to children that you leave at home with your, your family in other countries, and those four changes are hugely important.

Meanwhile, we have the idiot Nigel Lawson pontificating in the Daily Telegraph. I have been asked, he writes: "what, then, is your alternative to being in the European Union?". To that he responds:

So far as the detail is concerned, we would repeal the 1972 European Communities Act, which establishes the primacy of EU law over our own UK law. The morass of EU regulation, much of which is costly, unnecessary and undesirable, would become UK regulation, which we would then be free to accept, repeal or amend as our national interest requires.

And we would continue to trade with the EU, as the rest of the world does today, almost certainly assisted by a bilateral free trade agreement, which they need far more than we do.

This is the man that the IEA used to head its Brexit prize judging panel, and the man who is currently the chairman of Vote Leave. With people like this let loose, it's no wonder the leave campaign is in trouble.