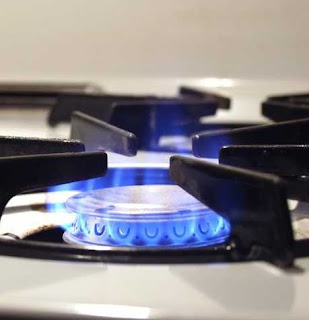 After the recent eye-watering increases in gas (and electricity) prices, The Economist is telling us that the situation is going to get even worse.

Britain's gas market, it says, is changing fundamentally in ways that make it much more vulnerable to higher gas prices. As domestic supplies dwindle, Britain must make up the shortfall from overseas, either through pipelines from Europe or by buying shipfuls of liquefied natural gas (LNG) on the global market. Currently, North Sea production can supply around two-thirds of Britain's maximum demand; that will fall to around half as soon as 2010.

Expensive gas is particularly painful for Britain, which relies on the stuff to heat around 85 percent of its homes. The country also uses gas to generate around 40 percent of its electricity, a particularly high proportion that is set to rise still further over the next decade.

The reason cited for this is the closure by 2023 of all but one of Britain's "doddery nuclear plants" and new environmental laws (aka the EU's large combustion plants directive – although The Economist does not state this) which "could mean that up to half of coal stations will have to shut down over the coming years."

The magazine then tells us that, "On current plans much of that capacity will be replaced by cheap, quick-to-build gas plants, boosting demand and making Britain even more reliant on flaky supplies from the international markets."

Herein, though, lies another story which the Economist does not tell us. In written evidence to the Environment Audit Committee, from our favourite energy company npower, the true causes of the excessive reliance on gas are sketched out.

Specifically, the company states that the UK has benefited from a diverse energy mix which has helped to ensure security of supply through the balance of nuclear (around 16 percent), gas (around 31 percent) and coal (around 35 percent) generation. In recent years, it says, there has also been an increase in renewables, which now constitute between 2.5 and 3 percent of the UK generation portfolio.

However, even with energy efficiency measures reducing demand growth below historic levels, the company says that it anticipates that peak demand will grow by almost 9GW between 2005 and 2015. During the same period, 7.5GW of nuclear plant (Magnox and AGR) is expected to be decommissioned as well as up to 4GW of older Combined Cycle Gas Turbine (CCGT) stations.

This, we are told, requires investment in 20GW of new plant by 2015 in order to maintain a 20 percent capacity margin. With peak demand then forecast to grow by almost 4GW between 2015 and 2020, and the retirement of old coal and oil plant under the Large Combustion Plant Directive (LCPD) by the end of 2015, the UK would require almost the same amount of new plant again to maintain security of electricity supplies.

Thus, the company asserts that there is a "a need to consider the more serious concerns to electricity from 2008."

These concerns, it tells us, "are avoidable with suitable infrastructure investment if action is taken now." But, whilst the National Grid's Seven Year Statement shows substantial planned new capacity, very little of this is actually under construction.

And then we get to the beef:

A major impediment to commitment is absence of clarity on two important environmental issues: LCPD and Phase 2 of the EU Emission Trading System (EU ETS) beginning in 2008, and also whether there will be any successor to the Kyoto Protocol or even any carbon trading post-2012.

We are concerned that the definition of a combustion plant currently being proposed under the LCPD will curtail the life of "opted out" coal plant even further. In summary, we have strongly urged the UK Government to implement the LCPD on the basis of plant="boiler", rather than plant="stack" at least for plant opting out under the terms of the 20,000 hour derogation. If the LCPD is implemented in the way currently proposed, the UK would be deprived of the security that retiring coal plant can provide during the challenging transition from a high carbon generation industry to a low one.

There is no clear view of the availability or cost of CO2 emission allowances from 2008, during the second phase of the EU ETS and therefore no market view of the value or cost of power. Yet the UK energy industry urgently needs to commence investment in new forms of generation to meet demand and further reduce emissions. We propose that the UK Government resolves the issue of the allocation to the electricity sector urgently, in advance of finalising the National Allocation Plan and submitting to the European Commission.

In light of such fundamental uncertainties, it is difficult to evaluate the outputs, costs and revenues for investment appraisal purposes with any degree of confidence. Any appraisal would need to factor in a variety of adverse regulatory scenarios or apply a marked cost of capital premium to reflect the risks. In these circumstances investment decisions tend to be postponed, the risk of supply disruptions inevitably increases and the costs of responding to shortage are ultimately higher. The principal impediment to effective markets and investment decision-making is uncertainty regarding the environmental legislative and regulatory framework.

Note, please, that last sentence: "The principal impediment to effective markets and investment decision-making is uncertainty regarding the environmental legislative and regulatory framework."

When the lights go out, it will not be because there have been any technical impediments to the supply of the power we need. The cause will have been regulatory failures which have inhibited and distorted investment decisions. And, because of that also, the power we do get will be that much more expensive.

The piece we have quoted, incidentally, was in October 2005. "If we act now …" it said. But we didn't. That we did not is through the combined effect of the dead hands of both Whitehall and Brussels, setting the scene for an entirely avoidable crisis. That makes it a politically induced crisis, which is now virtually unavoidable, the issues raised by npower still largely unresolved.

Yet still it has not registered, with the bulk of the chatterati frittering their time away on mindless speculation about the fate of our prime minister. You can see why we get so irritated and despondent.