An "honest debate" about energy 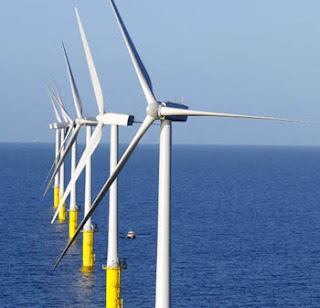 Paul Golby, chief executive of E.ON UK, is obviously not a politician, calling as he is for an "honest debate" about Britain's energy future.

This coincides with the Crown Estate announcing "a major new phase in its drive for renewable energy, calling for bids to build up to "25 gigawatts" of offshore wind turbines. In addition to the 8 gigawatts "already in the pipeline", this has been reported by diverse media outlets as (potentially) supplying the "equivalent to one quarter of Britain's electricity supply".

Of course, it is no such thing. Even if these machines were ever installed, the total of 33 gigawatts refers to installed capacity. But, owing to the vagaries of wind strength, the average delivery will be nearer 30 percent, accounting for a mere 10 gigawatts, with significant periods when there is no energy production at all.

Thus, 5,000 more wind turbines, to be built on eleven sites around the British coastline  at a cost of £60-80 billion - would deliver no more than the output of five nuclear power stations costing a maximum of £14 billion. And, to guard against low wind periods, we will also need the equivalent in back-up plant.

Thus do we get Golby criticising the notion that moving towards renewables was cheaper. "We must dispel the myth that renewables are cheap," he says. "Because we have all been silent on this, people think it won't cost anything."

Nor indeed does the (theoretical) capacity announced today in any way address our energy needs. At the moment, to meet Britain's peak electricity demand, our power stations need to provide 56 gigawatts (GW) of capacity. Ten gigawatts, nearly a fifth, comes from our ageing nuclear power stations, all but one of which are now so old that over the next few years they will have reached the end of their useful life.

On top of that, however, we shall also have to shut down nine more major power stations  six coal-fired, three oil-fired  forced to close by the crippling cost of complying with an EU anti-pollution law, the so-called Large Combustion Plants directive. This will take out another 13 gigawatts of capacity, bringing the total shortfall to 22GW - a staggering 40 percent of the total demand.

We do, of course, have a reserve capacity as not all generators are on-line all the time. Our theoretical maximum is 76 gigawatts but Golby estimates that by 2020 the UK will need more than 120gw of capacity. To achieve that, we will need to build about 50 gigawatts of capacity  about 25 nuclear power stations.

With the best will in the world, therefore, not only is announcement of new offshore capacity overstated, even if it could deliver, it does not even begin to make up for the shortfall anticipated.

Thus does Golby criticise the "quality of debate" about the country's energy future, saying that it was dominated by single issue politics. He calls on the government to take a lead in improving understanding of just how serious was the challenge to "avoid the lights going out".

No longer  and not for some time  has this been a theoretical issue. Yet, never do I recall such an important issue being treated in such a cavalier fashion. This should be at the very centre of politics at the moment. By 2015  if not before - we could be facing the most serious disruption to our power supplies since the "three day week" of the 1970s.

What is not properly realised though is that the impact of such power cuts on the Britain of today would be far more damaging than they were in the time of Edward Heath 35 years ago.

Compared with then, our dependence on continuous electricity supplies is now infinitely greater  thanks above all to our reliance on computers. We are no longer talking just about factories shutting down or lighting our homes with candles.

Without computers our entire economy would now grind to a halt.
Scarcely an office, shop, bank or hospital in the land would be able to function. Our railway system would be immobilised. Road traffic would be in chaos as traffic lights ceased to operate and petrol stations closed down.

As we pointed out recently, we are running out of time. If both the media and this awful government cannot address these issues seriously, we are in really serious trouble. Unfortunately, there is no sign that either are so doing.