Booker: another fine Met they got us into 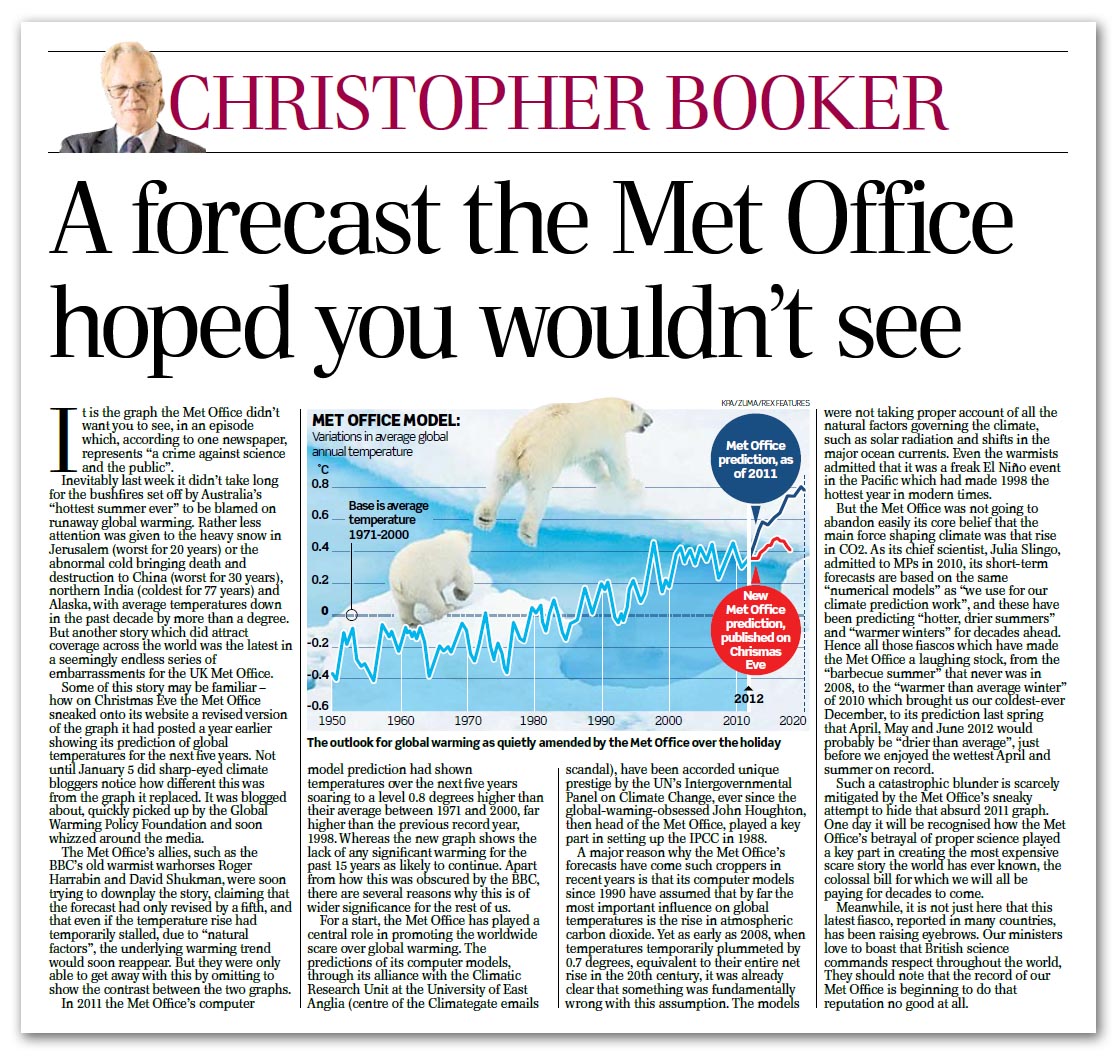 In his main piece today, Booker has a side-swipe at the Met Office and its attempt to bury bad news on Christmas Eve last, when it revised downwards its predictions for temperature increases for the next five years, displaying a revised graph to replace earlier higher predictions.
In 2011, the Met Office's computer model prediction had shown temperatures over the next five years soaring to a level 0.8 degrees higher than their average between 1971 and 2000, far higher than the previous record year, 1998. Whereas the new graph shows the lack of any significant warming for the past 15 years as likely to continue. Apart from how this was obscured by the BBC, there are several reasons why this is of wider significance for the rest of us.For a start, it is not generally realised what a central role the Met Office has played in promoting the worldwide scare over global warming. The predictions of its computer models, through its alliance with the Climatic Research Unit at the University of East Anglia (centre of the Climategate emails scandal), have been accorded unique prestige by the UN's Intergovernmental Panel on Climate Change, ever since the global-warming-obsessed John Houghton, then head of the Met Office, played a key part in setting up the IPCC in 1988.A major reason why the Met Office's forecasts have come such croppers in recent years is that its computer models since 1990 have assumed that by far the most important influence on global temperatures is the rise in atmospheric carbon dioxide. Yet as early as 2008, when temperatures temporarily plummeted by 0.7 degrees, equivalent to their entire net rise in the 20th century, it was already clear that something was fundamentally wrong with this assumption.
The models were not taking proper account of all the natural factors governing the climate, such as solar radiation and shifts in the major ocean currents. Even the warmists admitted that it was a freak El Nińo event in the Pacific which had made 1998 the hottest year in modern times.But the Met Office was not going to abandon easily its core belief that the main force shaping climate was that rise in CO2. As its chief scientist, Julia Slingo, admitted to MPs in 2010, its short-term forecasts are based on the same "numerical models" as "we use for our climate prediction work", and these have been predicting "hotter, drier summers" and "warmer winters" for decades ahead.