EU referendum: the sum of all our fears 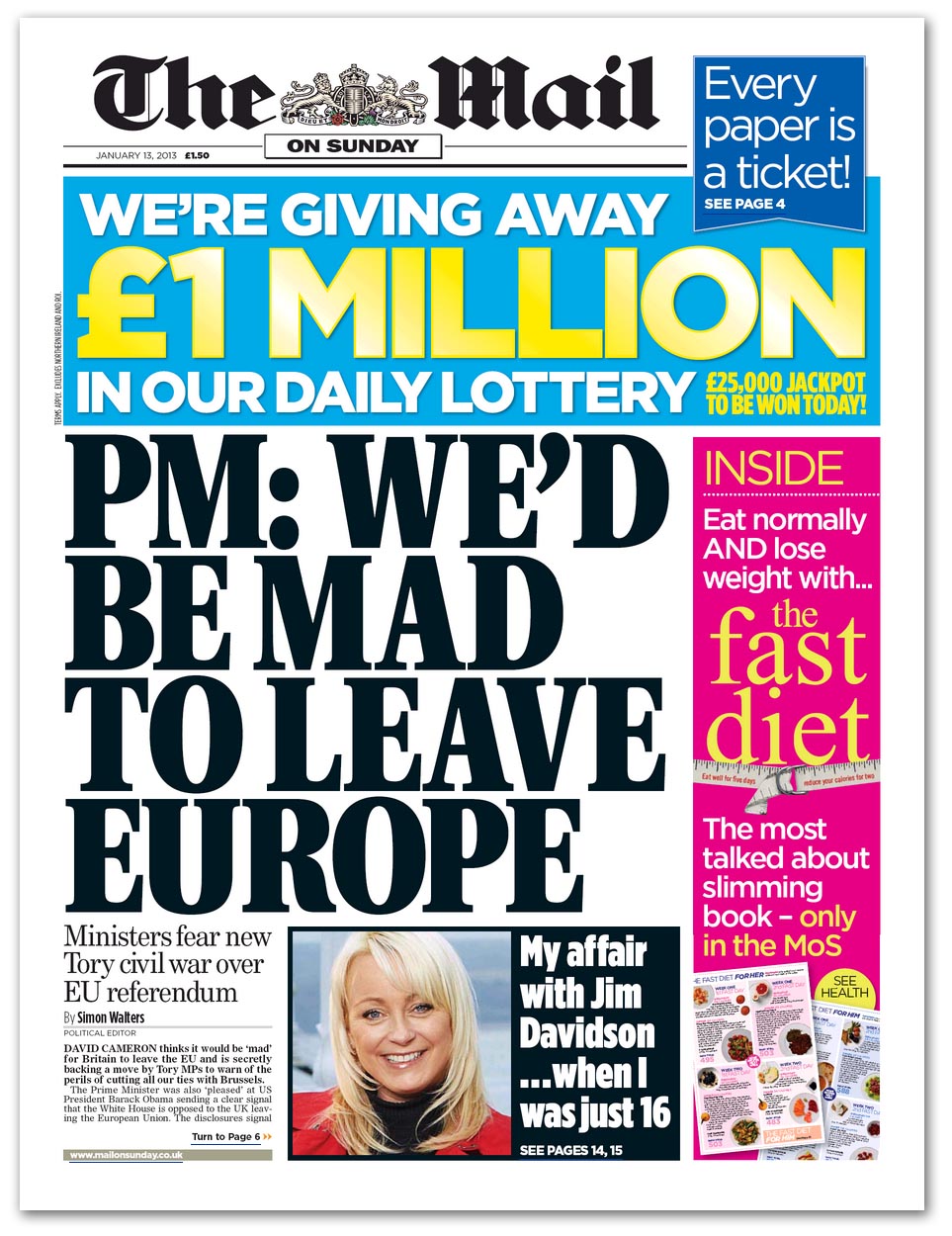 Mr Cameron does not believe that EU withdrawal is "realistic or desirable", we are told. And he thinks hardline Eurosceptics who believe Britain can go it alone regardless of the effect on trade and jobs – or what America and other key nations think – are "mad".

But, we might say, no one in their right mind would argue that Britain could – or even should - "go it alone", except that UKIP is arguing precisely that, with its plan to repeal the European Communities Act and then start negotiating with the EU. In this very narrow respect, Cameron is right.

One can therefore see another part of the europhile strategy unfolding, alongside which UKIP is excluded from the serious debate while being exposed to knocking copy as the europhile Sunday Mirror offers details of the "ugly face" of the "homophobic" and "racist" UKIP.

Meanwhile, the debate is further confused by the emergence of Swindon MP Robert Buckland, who hijacks the title of "Eurorealist" for himself. He is neither "Europhobe nor Europhile", he declares, as he rounds up around 20 Conservative MPs to publish a letter claiming that leaving the EU would cause "massive damage" to Britain economically and diplomatically.

"There is a silent majority out there", he says, "who do not want Britain to leave the EU. It would be defeatist and of massive detriment to the UK and our influence would be greatly diminished, as the White House made clear". He adds: "The danger for the Tories is that because the Right-wing Eurosceptics are making the most noise, we could slide towards the exit door of the EU".

What thus started as a simple question of whether we should stay in or leave the EU, therefore, is getting bogged down in a quagmire of claim and counter-claim. Loose terminology and imprecise definitions blur the edges while the lies confuse and deceive.

All the time, the issue is being cast as an "economic" question, with the constitutional arguments relegated to the back burner. The "European Union" becomes "Europe" and the reality of us having been shackled to a system of government dedicated to political union has been all but completely lost.

One bright note is that the push for renegotiation seems set to backfire. As it stands, Angela Leadsom et al are backing Mr Cameron into a corner, making it impossible for him to progress without making some concessions, while the "colleagues" are making it increasingly clear that they are not prepared to deal.

Taking into account the latest polls, this offers some intriguing possibilities. At the moment, it is virtually a given that we would loose a straight "in-out" referendum, and is also likely that when offered a choice between a renegotiated deal and withdrawal, the majority would go for the deal.

However, there the polls suggest that there is a third possibility, where the "offer" is between a failed or refused negotiation and withdrawal. In that event, the "out" proposition could well succeed.

This puts Mr Cameron in an even more difficult position. He or his advisors will doubtless be aware of this possibility, which will add even more complications which he must factor into his forthcoming speech, making a referendum even more perilous.

Yet another uncertainty is developing: Ed Miliband indicates that he will not follow Cameron in pledging a referendum, dismissing the prime minister's strategy as "incredibly dangerous".

What is now beginning to shaping up is the classic Tory nightmare, with clear blue water between the two main protagonists, while their own party is irretrievably split over "Europe", leading to slaughter in the polls.

This presents Cameron – and us all - with a lose-lose scenario. Whether he offers a referendum or not, his party splits, leaving it terminally weakened for the 2015 election, opening the way for a Labour government that has managed to avoid any commitment to a referendum. That will lock us into the EU for the foreseeable future.

Probably, the only way out for Cameron is to make the weakness his strength, and go full-frontal for the exit, burying UKIP and recruiting not just part but most of the eurosceptic vote. If he then wholeheartedly made the case for a Britain outside the EU – which would not be difficult to do – this could be just enough the secure electoral victory.

Sadly, there seems no way that Mr Cameron could countenance such a bold step, which means that we must suffer another five years of Labour before the EU gets back onto the agenda. And that is another price of "Europe" – the destruction of the Conservative Party.