Climate change: the juggernaut rolls on 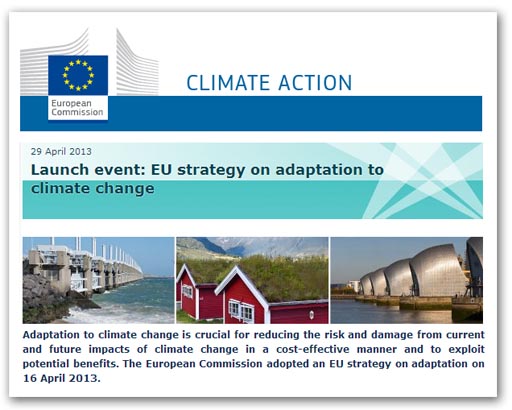 Completely oblivious to the real world, the "colleagues" in Brussels today have launched their strategy on adaptation to climate change, complete with an address from Connie Hedegaard, the commissioner for "climate action".

This is on the back of COM(2013) 216 final, the strategy document which was published on 16 April, and today's monster report from the the European Environmental Agency (EEA), plus no less than nine Commission staff working documents, such as this one, and this, where the detail is buried.

No one outside the loop is going to read but a fraction of the hundreds of pages – life is too short. But the problem for us all is that climate change adaptation is now to take a central part in all EU policy-making, as we see here, in a report which outlines the principles and recommendations for integrating climate change adaptation considerations under the 2014-2020 rural development programmes.

That adaptation is now a key policy driver is indicated in the foreword to the EEA report, written by professor Jacqueline McGlade, executive director of Agency. Adaptation, she writes, is not simply about doing more, "it is about new ways of thinking and dealing with risk and hazards, uncertainty and complexity".

And in a clue to the mindset, we find McGlade telling us that climate adaptation requires precautionary "science" and approaches, with an emphasis on "probability and multiple reactive thresholds", rather than a reliance on the statistics of the past. There is also scope, we are told, "for increased complementarity between adaptation and mitigation actions".

If I were to be honest, I would have to admit that I don't actually know what "probability and multiple reactive thresholds" actually mean. The phrasing does seem to stem from decision field theory - or perhaps not. The jargon is impenetrable. McGlade might just as well be writing in a foreign language. In some ways, she is.

Needless to say, the media does not even attempt to penetrate the jargon. Most newspapers ignore today's event, with only the loss-making Guardian running a report. And even then, it focuses on the tangible issues, rather than the true focus of the initiative, with is to re-shape Commission policy.

However, with this event occurring a day after Russian scientists warned that we may be entering a prolonged period of global cooling, this is a classic example of the juggernaut rolling on, blind to the reality.

A clue to just how distant the thinking is from the real world lies in the COM final, which blithely tells us that "snow tourism" is one of the economic sectors which is "already facing the impact of climate change", despite the industry just having enjoyed a record season.

But now, with "adaptation" embedded in the very heart of Commission policy, there will be no rooting it out. This is the intellectual equivalent of the herpes virus - the only sure way of destroying it is to destroy the host. And, before we can rid ourselves of it, that is what we will have to do.

Meanwhile, the juggernaut rolls on, and on, and on …