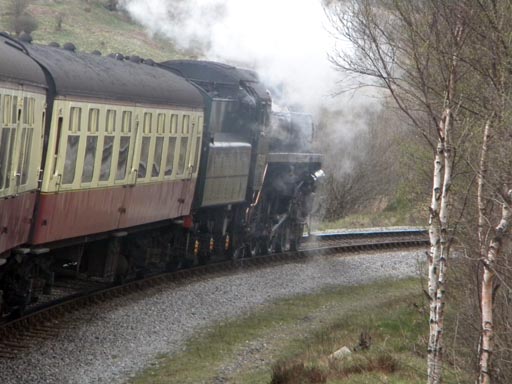 "Whether, indeed, the house of commons be in a great measure filled with idle school-boys, insignificant coxcombs, led-captains and toad-eaters, profligates, gamblers, bankrupts, beggars, contractors, commissaries, public plunderers, ministerial dependants, hirelings, and wretches, that would sell their country, or deny their God for a guinea, let every one judge for himself".
So said Major John Cartwright in his treatise Take Your Choice published in 1776, a document in which he enunciated the very same six points later to be packaged by the Chartists in 1838 as the People's Charter, some 62 years later.

When then is the link between these and the picture of a steam train? Well, the picture was taken yesterday when we were guests of the North Yorkshire Moors Railway who very generously made available their facilities so that I could be filmed talking about the Chartists against such an impressive backdrop – all part of our Harrogate Agenda foundation video.

The idea was our producer's, who found that the railway had been established within a couple of years of the publication of the People's Charter, providing good visual cues for the interview, also raising the role of the railways in helping the Chartist message to be spread so widely.

Fortified by equally generous hospitality from the delightful refreshment room at Pickering Station, done out in the early British Railway colours, we then moved on Leeds University and the School of History, where we interviewed Professor Malcolm Chase, one of the leading authorities on Chartism, and author of the definitive book on the subject.

What followed was a masterclass on Chartism, in which we were also introduced to John Cartwright, all captured on film. The interview will add a powerful dimension to our video, which is slowly taking shape. However, back home, the sheer intensity of the work has left me exhausted, so I will have to do catch-up in the morning after a night's sleep.