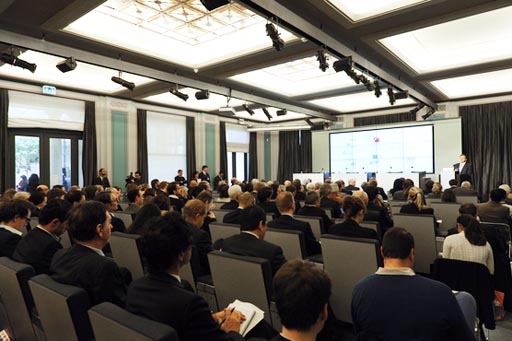 One struggles to be at all motivated by the EU referendum Bill, introduced to the Commons yesterday, to the cheers of Tory "eurosceptic" MPs. This has so nakedly become part of the Conservative general election strategy that it has lost much of its meaning as a serious political issue.

Thus we have Tory surrogate Ben Brogan hyperventilating over the Bill, while a transparently partisan website extols its virtues, while at the same time offering "news from The Conservative Party" as a default value on the support panel.

What makes the Bill doubly unreal, though, is that it is framed without any reference to events happening in Europe proper, which may shape the nature and timing of events. It may even impact on this party political initiative in such a way as to make it either redundant or tear such a hole through the timing as to make it impossible to hold.

The crunch of the Tory campaign is the legend that "it's time to let the people make a choice" but, without that all-important reference to events elsewhere, the promoters can't answer a simple but vital question. What choice? What is going to be on offer?

On the Tory website, the "offer" is clear enough, couched in terms of negotiating "a fresh settlement in the EU that is better for Britain" and then the Conservatives (if they have been elected to office, will "put the result to the British people in an in-out referendum by the end of 2017".

This means that a hapless Foreign Secretary, bound by an Act of Parliament, for which he actively campaigned, is effectively committed to conducting negotiations with EU member states, prior to the end of 2017, and in good time for there to be a campaign on the merits of the "settlement", before the poll goes ahead.

It is when we attempt to put flesh on these bones, though, that we get into trouble. As far as the negotiations go, we cannot insist that the EU convenes an IGC simply to approve any changes to the treaties that we might want, in which event it has become a given that a Conservative government will "hijack" the expected EU treaty, that the colleagues have been discussing  the one needed to regularise the eurozone issues.

With Germany blowing hot and cold on this issue  some of the convolutions of which we have recorded  it is not at all easy to work out when, or if, those treaty negotiations might be convened. But it is also the case under current EU treaty law that, if substantial changes are proposed, there must first be another convention on the future of Europe.

The convention route to a treaty is looking ever more likely, as suggested at a recent conference in Brussels of leading European think-tanks (pictured above). In front of Van Rompuy and Barroso  the chairman of the Bertelsmann Foundation, Aart De Geus, was prepared to put a timescale to this of  "two or three years".

On the other hand, we see Jacques Delors talking in terms of the "necessary big push" having to be made "over the next ten years", suggesting later rather than sooner.

Meanwhile, the Commission is still promising to "present the broad contours of its outline for the shape of the future European Union in good time to allow the issue to be debated by European citizens and other stakeholders ahead of the next European Parliament elections in 2014", then "later" committing to a treaty revision.

As we have pointed out so many times, that timetable does not allow for completion (or even the start) of negotiations before the UK is supposed to go to the polls. That means  if the UK timetable as mandated by this referendum Bill has to be honoured  that we go to the polls without a renegotiation or new settlement.

To add further to the complications, with or without a UK negotiation, we are looking at a treaty emerging from the proposed convention and the IGC, but the earliest is probably 2018. Given that this will take powers from member states, including the UK, to we then have another poll, under the "referendum lock" procedure.

Like busses, it would seem, you wait ages for a referendum then two turn up at the same time (or very close together). And then what happens if, having voted "in" in the first referendum, we vote "no" to a new treaty?

Basically, then, this current referendum plan, together with a supposed negotiation, simply doesn't hang together. Apart from anything else, the timetable can't be kept. A meaningful poll just can't happen by the end of 2017  unless, of course, it is a straight "in-out" without the renegotiation, and I don't see that happening at all.

What this then points to is the very simple proposition that you cannot make plans concerning our membership of the EU without reference to what is happening on the political stage in that self-same European Union. But here, we have the "little Englanders" of the Tory Party attempting to do precisely that. And they are leading us up the garden path to nowhere.