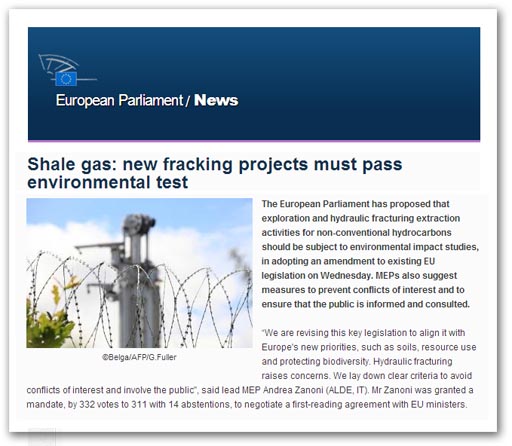 We warned about it a little way back and now the European Parliament has voted by 332 votes to 311 with 14 abstentions, in favour of mandatory EIAs for shale gas drilling, including trial drilling. The full title of the measure going through is the "Assessment of the effects of certain public and private projects on the environment: provisions concerning the quality of the EIA", amending Directive 2011/92/EU, the "EIA Directive".

The original commission proposal COM(2012) 628 final is here and the text of the amendments can be seen here (see Part 2, p.189 et seq – search within the document for "shale"). If this goes through as amended by the European Parliament, it will severely handicap exploration and development, and substantially add to costs. But that was the intention – this was always a wrecking move, supported by the EEB.
The story has been picked up by some of the legacy media, including the Telegraph, which relies for its comfort quote on Conservative MEP Struan Stevenson. No UKIP MEP seems to have been quoted, and there appears to be no mention of the issue on the party website, even though it is important enough to have been picked up by the New York Times.

The Greens, of course, strongly welcomed the vote. Spokeswoman Sandrine Bélier claimed it would "help prevent risky shale gas projects being bulldozed through in spite of environmental concerns and public will". Her party already believes there is sufficient evidence to ban this "risky technology" and are keen, at the very least, on stricter control. The vote yesterday is seen as "a first step in this direction".
The legislative initiative now rests with the Council, which can block the EP move, but there are no indications as to whether interested countries – Poland and the UK in particular – have the support needed to win a favourable decision with QMV. This we will see by the time of the second reading vote in the EP, for which a date has not yet been scheduled.