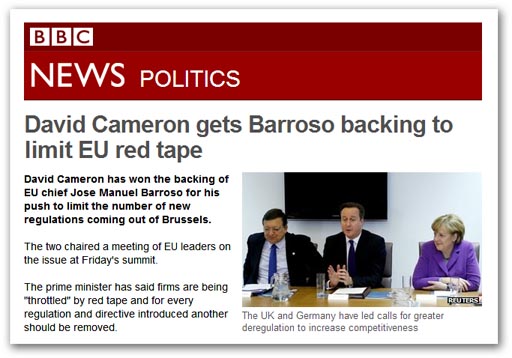 According to Euractiv, at his press conference following the European Council just ended, David Cameron snubbed all the other issues reflected in the Conclusions and instead focused on the "British" initiative to cut red tape in the Union.

At the conference, the prime minister stood in front of a banner, reading "Cut EU red tape", while an aide distributed a folder "summing up the main ideas behind the British drive to reduce bureaucracy in the Union to reporters". This includes the infamous "30-point plan", listing the measures his useful idiots in the business fraternity want removed - including request not to regulate on shale gas.
True to form, the BBC then soaked up the propaganda,along with the europhile Independent, both reporting that Mr Cameron had won the backing Barroso for his push to limit the number of new regulations coming out of Brussels.

Cameron is said particularly to have expressed his satisfaction that cutting red tape had been mentioned in the Conclusions, where it can be found under the heading "regulatory fitness" (paras 29-32).

But, such are the joys of the internet that we are able to view the Conclusions directly, and there we find the European Council welcoming the recent Commission Communication on regulatory fitness (REFIT), which "acknowledges work already undertaken in recent years to alleviate the burden of legislation, in particular for SMEs, and proposes ambitious further steps to make the EU regulatory framework lighter".

Now, the point here is that REFIT is a Commission initiative formally announced on 2 October, two weeks before Mr Cameron announced his own initiative to Cabinet.

With the European Council now calling on the Commission to make "further substantial proposals in this field" – of "regulatory fitness" - and no mention whatsoever of the UK or Mr Cameron's effort, we have a situation where, far from Mr Cameron getting the backing of Mr Barroso, it is the other way round. Mr Cameron, through the European Council, is supporting Mr Barroso's initiative.

What the BBC is reporting, therefore, is almost the exact opposite of the truth. Mr Cameron's little stunt in Brussels is pure play acting. And the worst of it is that, with barely any UK legacy media reporting this, Mr Cameron will be dining out on his efforts to cut "EU red tape” from now until the general election.

Even then, the truth is that the European Commission's programme is not what it seems. Although there is a minimal amount of retrenchment, the initiative is more than a little sinister. Rather than being cut back, existing legislation is simply being consolidated. Some is being "undated", but that is mainly to permit the Commission to issue secondary legislation and to remove the Council and Parliament veto power on this legislation. Then, some is being rewritten to accommodate new "soft law" from international bodies.

As such, "deregulation" is a minor and incidental part of the programme. Unsurprisingly, Reuters observes that, with the Commission responsible for regulating across all areas of European industry and in the process of overhauling the continent's financial architecture, "there is little prospect of a huge reduction in the number of EU laws".

Laughably, though, AFP headlines: "UK urges EU to cut red tape and clear way for shale", even after the Commission has affirmed that it is going ahead with "muscular" regulation. This agency report bears not the slightest acquaintance with the truth. To present this as a deregulation exercise is a cynical charade. To present it as a Cameron initiative "backed by Barroso" is to perpetrate a lie.
But, as always, not one journalist in the entire legacy media has the wit to say so. Feed the hacks drivel and they will dutifully report it. Alongside the ranks of British politicians, they are oblivious to the reality of the European Union and are as guilty as the politicians for keeping people ignorant, by playing along with the charade.