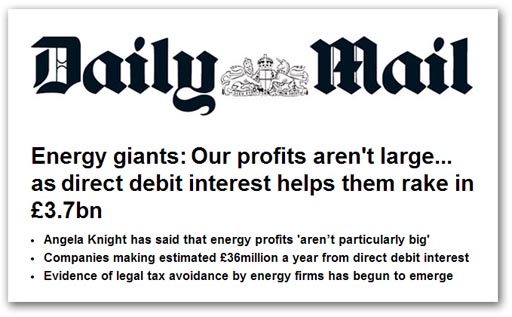 Up in headlines today is a spat over energy profits, with claims also emerging that the "Big Six energy firms" are engaged in "widespread tax avoidance".

Despite huge profits, the Mail tells us, firms can legally reduce tax bills by exploiting loopholes that allow their owners to lend them money via the Channel Islands Stock Exchange. This is exactly the scam that the water companies have been running, and now it has emerged that Scotia Gas, UK Power Networks and Electricity Northwest have avoided paying a total of Ł140 million in tax by racking up interest on debt to their owners.

This, of course, is perfectly legal, although we find the Chief Secretary to the Treasury, Danny Alexander, telling Andrew Marr Show on his Sunday BBC1 TV show that he was "livid" about tax avoidance, adding: "Everybody needs to pay their fair share".

The irony of this is not immediately obvious, but we have europhile Danny Alexander complaining about something which has been brought about entirely by EU treaty provisions, and about which the UK government can do exactly nothing.

What Mr Alexander and his coalition colleagues are falling foul of is one of the most fundamental provisions of the treaties, the "free movement of capital" which was one of the "four freedoms" in the original 1957 Treaty of Rome.

What this means is that the UK has lost tax sovereignty. No longer can HMG demand that cash earned in this country is kept here in order that tax is paid on it. Restrictions on movement are prohibited. Thus, companies trading in the UK can move their money offshore and if, by so doing, they can convert it or manipulate it in some way as to take it outside the UK's tax system, they are free to do so.

This freedom is somewhat complicated by Article 65, which ostensibly permits Member States to apply their tax law to offshore investments, except that this is undermined by the requirement that any measures and procedures taken "shall not constitute a means of arbitrary discrimination or a disguised restriction on the free movement of capital and payments".

Not content with this, the Treaty goes further. In Article 64, it effectively transfers legislative competence over movement of capital issues to EU institutions and it is "only the Council", acting in accordance with a special legislative procedure, which can "adopt measures which constitute a step backwards in Union law as regards the liberalisation of the movement of capital to or from third countries".

Other words, if the UK wanted to address this situation, it must do so at an EU level, applying to the Council. And, according to Art.64, measures must be agreed unanimously, giving every other Member State a veto over our ability to prevent untaxed money going offshore.

Thus, while Starbucks, Amazon & Google have hit the headlines recently, what is not being said is that these companies are enjoying the fruits of what amounts to "tax tourism", courtesy of the EU.

There is no reliable figure for this tax tourism, although one estimate puts it at Ł5.5 billion a year, while another suggests Ł12 billion or more. According to HMRC the tax gap for the entire economy amounted to Ł32 billion in 2010-11 – larger than our annual EU contribution.

Yet, while the media hyperventilates against the mere millions lost in benefit and health tourism, not one British media source has identified the tax tourism for what it is, even though this is said to undermine democracy.

More to the point, it is undermining the hegemony of the nation state – and deliberately so. The loss of tax sovereignty and the transfer of legislative competence to the EU means that, progressively, the UK has to seek a "European solution" for its problems, further tightening the grip of political integration.

Therefore, it is no wonder that the corporates are so keen on the EU and campaign actively for continued membership. Through its laws, the corporate world is keeping billions which would otherwise be paid in national taxes. As a result, tax is only for the "little people", while the tax-free corporate giants, with the blessing of the EU, milk us for profits.