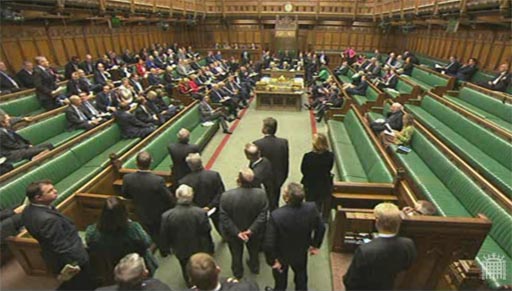 What is being called the Wharton-Afriyie ego-fest was under way in the Commons at the time of writing, starting with a delay after a division under Standing Order 163 seeking a private sitting. The vote recorded zero "ayes" and 290 "noes", so the debate goes continues in public.

Last night, Afriyie was in the loss-making Guardian asserting that his amendment for an early referendum should go ahead, without which the Conservatives risked losing the general election. He wants a referendum next October, allowing the Tories to "draw a line" under Europe before the election, opening the way for a "straight fight" with Labour on the economy.

Afriyie believes that his amendment is Conservative MPs' last chance to try to secure a referendum. "If we do not take this opportunity", he says, "we risk sleepwalking to election defeat by driving votes to UKIP".

The ConHome website, meanwhile, held a straw poll which came up with 35 percent of those who voted supporting a referendum next year. This was matched by the number of people who would like a referendum to be held on Cameron's timetable by the end of 2017. Since neither are going to happen, this is of academic importance only.

And just to keep us all entertained , chief executive of French-owned Nissan, Carlos Ghosn, is telling us that, if the UK was to leave the EU, it would need to reconsider its strategy and investments. This is presented by the loss-making Guardian as a threat that the carmaker might leave if the UK quits the EU. 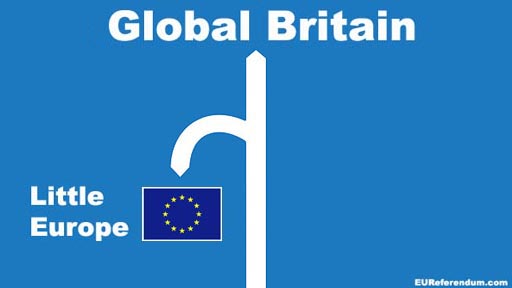 To coincide with the debate, The Economist trots out its usual dose of negativity, with a piece headed: "Little England or Great Britain?". This is sheer propaganda, as the magazine tells us, "The country faces a choice between comfortable isolation and bracing openness. Go for openness".

This is a false choice. As we confront an increasing claustrophobic political construct, the real choice is between "Global Britain" or "Little Europe". Accordingly, we have adjusted the misleading Economist graphic.

Taking a cue from its own text, though, we see the magazine telling us that, although Britain once ran the world, since the collapse of its empire it has occasionally wanted to curl up and hide. But, says the magazine sternly: "It can now do neither of those things. Its brightest future is as an open, liberal, trading nation, engaged with the world".

With this we can but wholeheartedly agree. It is about time the UK stopped hiding behind the skirts of nanny Europe and took its place again as is as "an open, liberal, trading nation, engaged with the world", free from the encumbrances of "Little Europe".

It is now down to Bruno in Brussels to relieve the tedium of the Commons debate, though, which he does with great aplomb, bringing us tidings from Gerhard Schröder, one time German chancellor and now shill Russian gas interests.

Schröder is saying that Britain is the major problem facing the future of the European Union. He blames Britain for the financial crisis that engulfed the eurozone and for blocking the EU measures needed to put things right. "The problem has a name, and that's Britain. As long as the British block these moves, nothing will happen", he says.

"We can assume that Britain is no longer willing to join the euro area. Countries that are not in the euro area cannot prevent greater integration. It's tough but you cannot say 'I will not be there but I want a say'".

Pointing the way to a new treaty, Schröder, speaking at an economic forum in Bregenz, in western Austria, adds that: "The EU's political structure cannot remain static … We need to press ahead with Europe's political unity, towards a kind of European federation". So, little Europe speaks, a voice which will be dictating the referendum agenda in due course, far more so than the pointless debate in the Commons.