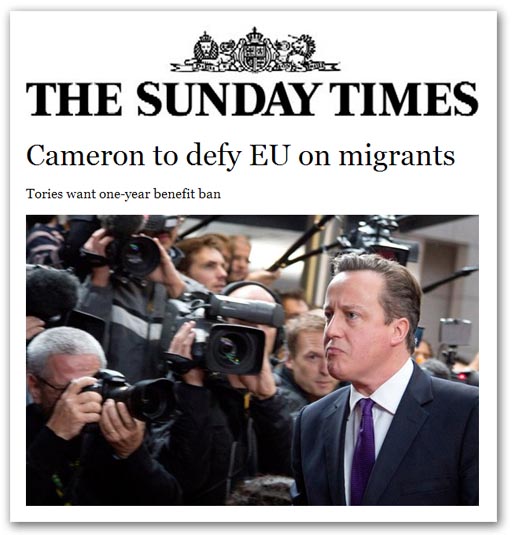 Newspapers today are giving much attention to the issue of migration and in particular the vexed question of the expected torrent of migrants from Bulgaria and Romania at the beginning of next year, with news of a fightback by prime minister David Cameron.

Thus, a lead story in the Sunday Times proclaims "Cameron to defy EU on migrants", while the Mail has, "Cameron prepares for showdown with Europe over benefits for Romanian and Bulgarian migrants" and the Telegraph tells us: "Cameron to clamp down on migrants' rights to benefits".

David Cameron, we are told, is set to defy "European" rules by announcing a severe new set of obstacles for immigrants, "one of many goals the prime minister will put to the EU in an attempt to negotiate a looser relationship with Brussels ahead of a 2017 referendum".

People wishing to enter Britain will have to prove they have lived here for a year, up from three months, before they can receive benefits in one of the proposals expected to be unveiled. Another policy would remove child benefits from the dependent children of migrant workers, sources claim.

Currently, Britain is already preparing to defend a case in the ECJ over its right to subject migrants to "additional tests" in order to merit state benefits, but it is by no means alone in its confrontation with the EU over this issue. As of 20 November, the European Commission decided to refer Finland to the ECJ for requiring workers applying for unemployment benefits to have worked in Finland for at least four weeks (or four months of self-employment).

This requirement, says the Commission, discriminates against workers from other EU countries and is in breach of EU law to ensure free movement of workers.

This principle ensures that workers exercising their right to free movement are not deprived of social security advantages to which they would have been entitled if they had spent their working life in only one EU country.

Helpfully, in its news story, the Commission identifies the sources of the rules, starting with Article 48(a) of the Treaty on the Functioning of the European Union (TFEU), which sets out the right of free movement.

Readers will note that both these instruments were agreed during Labour's last term in office, although this makes no particular difference. These are Single Market measures, agreed by majority vote in the European Parliament and by QMV in the Council, so the UK could not have blocked the measure even if it had wanted to.

Nevertheless, it is ironic that Regulation 987/2009 entered into force on 1 May 2010, only days before the general election, after which the coalition government under David Cameron took office. It is thus Mr Cameron who is having to bear the political fallout of something that was agreed by his predecessor, over which he has no immediate control.

Facing the prime minister then is the prospect of seeking repeal of these crucial regulations, which lies entirely within the gift of the Commission to propose, and the European Parliament and Council to dispose, while also attempting to remove or modify a core article of the Treaty, one which has been with us since the Treaty of Rome in 1957.

But, with the Telegraph and others prattling about "renegotiation", we are, as Autonomous Mind observes, in "Fantasy Island".

In what is a colossal waste of time and effort, "senior MPs" have started travelling to European capitals to discuss how to reform the EU ahead of the "in-out" referendum David Cameron has promised to hold by 2017. These are the Muppets from the Fresh Start group, who are also planning to publish a "negotiating mandate" laying out ten areas of "necessary reform"  in which so-called "benefit tourism" will feature prominently.

It is a measure of the utter fatuity of the Telegraph's coverage that the paper credits Fresh Start with having "sensible ideas". It joins the voices of those saying that the Prime Minister must draft his negotiating position as soon as possible. The more work that is done now, before the 2015 election, the more fruitful the negotiations will be should Mr Cameron win a second term, the paper says.

Thus we are told, his vision for a reformed EU needs to be clear, practical and directly to address the concerns of voters, adding with a vacuity that you could bottle and sell, "This could be the moment that redefines our relationship with Europe for ever".

Turn now to a piece we wrote two years ago, pointing out that not only does Mr Cameron not have the power to call for IGC, he is not even able to insist on items being included on the agenda when one is convened.

More to the point, a change as substantive as removing or modifying the treaty provisions on freedom of movement would require a convention, over which Mr Cameron would have no control at all. And it is this convention which is, in any case, in the offing, with a possible launch in the Spring of 2015.

When the history of this period comes to be written, therefore, one would expect there to be more than a passing footnote about how the legacy media were bogged down with trivia, unable or unwilling to address the fundamentals of treaty law, without which their writing is so much idle prattle.

Most of all, it seems, the media suffer from an incurable dose of "little Englandary", focused as they are entirely on Westminster-centric politics, unable to appreciate that we are part of a European Union which dictates the agenda.

Sooner or later, the legacy media (and the likes of Mr Cameron and the Fresh Start group) are going to have to come to terms with reality. Why, though, does it have to take so long?