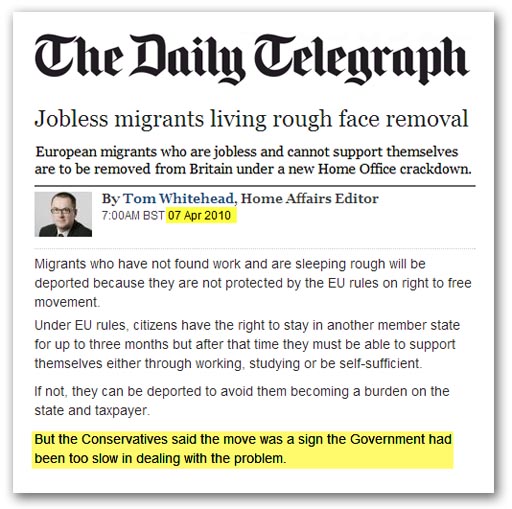 "Newly arrived EU jobseekers will not be able to claim housing benefit. If people are not here to work – if they are begging or sleeping rough – they will be removed. They will then be barred from re-entry for 12 months, unless they can prove they have a proper reason to be here", says Mr Cameron today.

But haven't we been there before? On 7 April 2010, just before the general election, we had the then Labour government announce that migrants who have not found work and were sleeping rough would be deported because they were not protected by the EU rules on right to free movement.

That was a trial scheme in Peterborough, also extended to parts of London, Oxford and Reading, but it had the Conservatives quickly condemning the Government for being too slow in dealing with the problem.

By July of the same year though, the scheme was coming under fire. "While these expulsions have a basis in domestic law, EU law is supreme in this area and any domestic law provision must comply with EU law", said Adam Weiss, assistant director of the Aire (Advice on Individual Rights in Europe) Centre.

"EU law makes it very difficult to justify expelling an EU national on the basis that that person is not exercising residence rights, which is what the [UK] authorities are trying to do," he added. "We anticipate that the higher courts will find all, or virtually all, of these expulsions unlawful under EU law".

By the following year, the scheme seemed to have degnerated into farce, with the idea that homeless jobseekers from EU member states could be deported having been successfully challenged.

Total figures for enforced removals for that year, including people refused entry at port and subsequently removed, amounted to 41,482. Those described as European accounted for less than ten percent – about 4,000 in all - barely scratching the surface of a problem when the UK had taken in 225,000 Roma alone.

And as for Mr Cameron citing the Netherlands in support of his actions, in February 2012, the European Commission was reported to be preparing to take legal action against the Netherlands if it pressed ahead with plans to deport EU nationals who were jobless for three months.

With that situation apparently unresolved, it looks very much as if Mr Cameron, on this issue at least, is indulging in his usual game of gesture politics. Whatever else he has in mind, deporting unemployed migrants from EU member states is not a serious contribution to the problem.