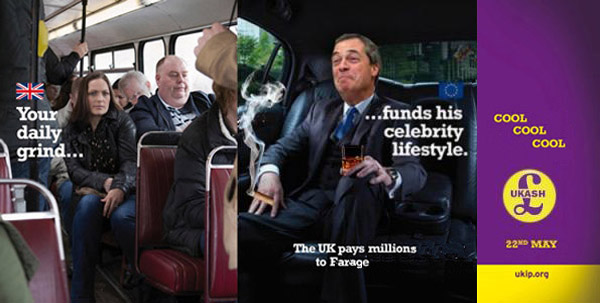 "The news that some MEPs have been feathering their nests yet again will make Nigel Farage's job even easier than it is", said the extraordinary editorial in the Telegraph yesterday. Extraordinary it was because Farage was amongst those feathering his own nest, setting himself up with a comfortable Ł71,000 a year pension at the public expense.

Over the past few days, and now on this, one wonders whether Farage has cast a spell which has suspended the laws of politics. How can it be that something which is so damaging to MEPs in general does not harm TGL when he too has dipped his fingers in the till?

Strangely, it was Matthew d'Ancona who, in the Sunday paper, wrote of the "astonishingly easy ride in the media", Farage was enjoying, only for us to see such an egregious example of it in his sister paper.

This coincided with the launch yesterday of UKIP's poster campaign, funded to the tune of Ł1.5m by Farage groupie and stage Yorkshireman Paul Sykes, another one who seems to have fallen under the spell. With the magic of photoshop, however, we can see a more accurate version of the "daily grind" advert (above).

Sykes, of course – as he always does – is keeping hold of the purse strings. The BBC notes that he is paying for the adverts directly instead of handing the cash to UKIP. He wants to make sure his money is used for campaigns and not sucked up in general party administration, then to end up in one of Farage's offshore funds. Trust only goes so far, it seems.

The essence of Sykes's campaign is the idea that we should be able to "take back control of our country" by voting for UKIP on 22 May. UKIP, we are told, is the "only political party advocating immediate withdrawal from the European Union". Why that should happen, when the euro-elections have no influence on our membership of the EU, is not explained.

The interesting thing also is that UKIP wants to make the euro-elections a referendum on our membership of the EU, presenting a vote for UKIP as being a vote for "out". But the party that is doing all this advocating hasn't the first idea of how it would manage a withdrawal, to this day not having published a coherent exit plan.

And although The Times stood on its own last week, with not one other newspaper joining the fray, their own particular version of the "daily grid" ain't over yet. There is a little corner of this world still that isn't under the Farage spell, so we expect to see some more interesting accounts of past deeds.