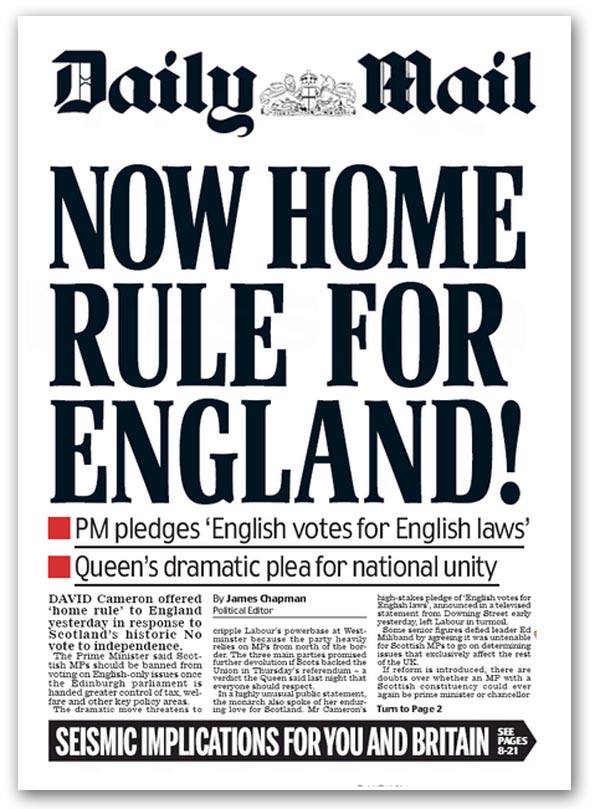 The Mail could not have got it more wrong with its front page, calling for "home rule" for England. This is typical media fluff, reacting to the hystérie du jour without stopping to harness a single brain cell.

For sure, up here in Yorkshire, we no more want to be governed by "Westminster", as the Salmonites so quaintly put it, than do the Scots. But that does not mean we want another load of politicrats dumped on us in some Brummie squat carrying an English Parliament label, telling us what to do. The very last thing in this world we want is more politicracy – more politicians feathering their own nests, lording it over us and telling us what's good for us.

Tam Dalyell had it right on the button when he spoke on Radio 5 live today, calling for the abolition of that abortion in Edinburgh – the Scottish Parliament - and the Welsh Assembly to boot. Instead, we need proper devolution, down to county level and below, where there is a true demos - a community of interest.
Furthermore, decisions can be made by the people who pay the bills. That is the other half of the equation. Owen Paterson spoke of the link between the provision of services and paying for them having been broken.  Local democracy requires local tax raising. If you are going to have tax and spend, then the money should be raised locally.

Then, of course, local democracy means local power. "Politicracy" means politician-power. We want people-power. The demos is not enough. We want kratos as well - power to the people. And the only way known of achieving that is through direct democracy, with an annual referendum on the budget. He who controls the purse strings holds the power.

Speaking for myself, counties are far too big a unit for proper democracy. My city of Bradford – and administrative unit with more than half a million inhabitants – is too big. We have to get smaller.

But then, when it comes to constitutional settlements, we also need to think small. If a golf club can have a constitution, why can't a local authority? And if there is to be a local constitution, then it should be agreed by the people, not the politicrats.

The big problem, though, is corruption and of local domains falling into the grip of the one-party mafias – the Rotherham and Doncaster syndrome. We need, therefore, to revert to the doctrine of "local administration – central supervision", with Westminster watching the watchdogs

This is a system where HM inspectors reach out, make their reports, and the district auditors bite. Officials who waste our money pay for it out of their own pockets. This is a system where we have two police forces – one national, one local. We set them against each other, one set of thieves to watch another.

As for new parliaments, burn down the gilded buildings. The old practice was to hold parliaments once a year, in the open – preferably in winter - with the business conducted standing up. And when it was finished, the delegates went home and got on with their honest business.

Sometimes, the old ways are the best ways.