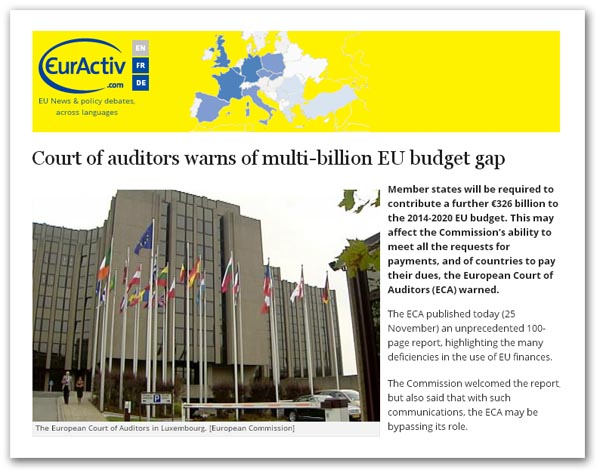 Covered by EurActiv yesterday, we get the outline of the news on the website, a press release and the report. This is the European Court of Auditors (ECA) telling us there is a substantial gap between the commitment and payment budgets, which has accumulated over the long term, affecting the Commission's ability to meet all requests for payments in the year in which the requests are made.

The legal funding commitments that are not disbursed until later (known as reste ą liquider or RAL) represented €222.4 billion at the end of 2013, most of it for commitments made for cohesion policy spending in the period 2010–14.

Together with other liabilities (mostly for purchases and staff pensions) of €103.4 billion excluding borrowings, this will require future disbursement from the EU budget of some €326 billion euro in addition to the amounts agreed for the MFF 2014–20 (as at the end of 2013).

Interestingly, this growing burden of payments was picked up by us in April last year. It was then that Booker reported: "The debt-ridden EU stares bankruptcy in the face" - at a point where the debt was expected to be €217bn by the end of the year.

Despite this alarming figure, sourced from a European Parliament report, our reports were ignored – as is so often the case – despite Booker asking whether the news should be making more headlines than it had, since the astronomic debt was nearly twice the EU's annual income.

I raised the issue of reste ą liquider again in November last year and once again in May this year only to be ignored by the great and the good, and the chatterati - as is the rightful fate of EU Referendum, maintaining its tradition for keeping secrets in plain sight.

But, now that the ECA picks up where the European Parliament left off, the RAL has suddenly becomes news. Rushed out by a hyperventilating Telegraph, it tells us that "the UK faces £34bn bill for black hole in EU budget". This is only the notional UK proportion of the outstanding debt, but it is enough to get the groupuscules squeaking with rage at the thought of another payment hike.

However, as the Commission points out, no new money is required – not in the short-term, at any rate. The budgetary RAL simply represents spending commitments for which payments have not yet been made. This, they say, is the normal consequence of running multi-annual programmes.

Therefore, the significant issue, as detailed by the French Government, is not that there is a RAL, but that it has been growing steadily, increasing by €90.9 billion between 2006 and 2013, up 69 percent.

This increase could exceed € 100 billion in less than 10 years (2006-2015) unless the Commission starts getting a grip of its political ambitions. Effectively, the Commission is mortgaging the present against future payments. If the trend continues, eventually the Commission will run out of money – unless it can negotiate a substantial budget increase.

With unfortunate timing, though, the news of the increased RAL comes as Juncker revealed a "giant EU investment plan" set at €315 billion, "to kick-start Europe's economy".

Yet there is something of a smoke and mirrors quality to this plan. Only €16bn cash is to come from the EU budget, leading the European Trade Union Confederation (ETUC) General Secretary, Bernadette Segol, to suggested the Commission is "relying on a financial miracle like the loaves and fishes".

Any miracle is going to have to cover even more ground if the RAL continues to mount, though, but it's going to be a long time before Juncker has to strut his stuff. The story of an increased RAL is real but the Telegraph comment is simply not true. There are no extra demands, and no extra payments which have to be made.

That's probably why the story didn't get any traction when Booker and I first ran it. But then we didn't think to collect spurious quotes from a number of talking heads, and jack up the story.

It certainly wouldn't have been much of a story if Commission spokesperson Jakub Adamowicz had been quoted. He said the Commission had noted the ECA report with "certain interest" and that although it "did not reveal any new findings", it was "good food for thought".