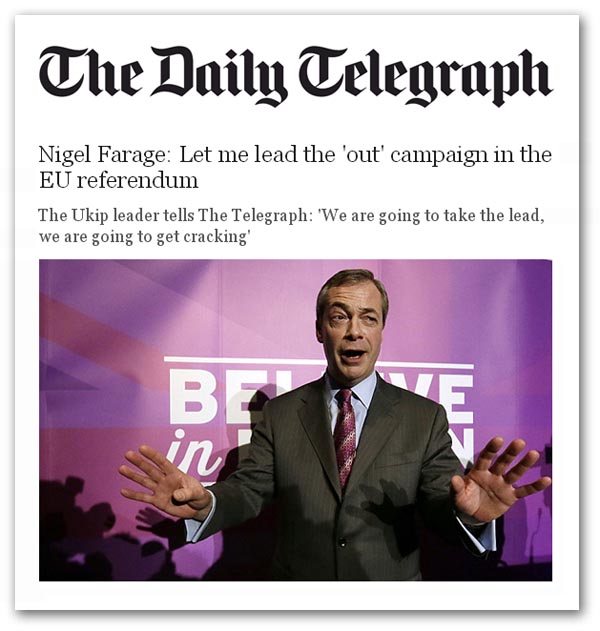 A day after we see a report that Blair is the least trusted figure in the EU debate, with Farage the second most distrusted figure, up pops the Ukip leader telling us he is going to lead the "out" campaign. So well prepared is the man, though, that he doesn't seem to have realised that this is a "yes-no" campaign, with him on the "no" side.
Displaying the same arrogance as other wannabes, he also fails to realise that the lead organisation is not going to self-nominate. The leads on both sides are for the Electoral Commission to designate – and that is not going to happen until after the Referendum Bill has become law.

The rather strange thing is that this is not exactly a secret. It has been a facet of all recent referendums, and is going to be a crucial part of this one. And there is a great deal at stake. Very substantial dowries – worth several millions – and other privileges are awarded to the designated organisations.

But if Farage is even aware of this, he has given no sign of it. In an apparent attempt to pre-empt this official process, he is planning to make a speech today to his own activists, after claiming: "We are going to take the lead, we are going to get cracking".

Then says Farage: "We will be launching a massive series of public events and meetings all over the country starting in September. These will be public meetings. They will be live web streamed". He adds: "We are going to be busy, delivering leaflets through the doors by the million. We are not prepared to stand around and wait".

What is worrying the man – and he's not alone in this – is prominent campaigners who want to wait to see the result of Mr Cameron's renegotiation before they make a move. In response, he says - changing the designation of the campaign: " The No campaign needs to get itself moving. All this nonsense from very snobby Tories that we should not dominate the campaign and I should go on holiday for six months – forget it!"

Nevertheless, while expecting to be at the forefront, Farage is saying: "we will open our arms and be all embracing and welcome everybody". We will "reach out broadly across Eurosceptic community and across communities in this country", he claims.

Bearing in mind that Ukip only represents eight percent of the total electorate, if it is to stand a chance of winning the lead designation - and thereby actually taking the lead - Farage will have to attract the support of others. Yet there are as yet no indications of which (if any) other groups are prepared to throw in their lot with the party.

The worst of it is that Farage is not alone in wanting to be top dog. Maybe at least one more and possibly two other groups may compete for the designation, leaving the anti-EU movement badly fragmented. This raises the spectre of the Electoral Commission refusing to designate a "no" lead at all, leaving the groupuscules to fight it out between themselves, without a government grant or any official status.

Despite this, Farage is making it clear that he refuses to be treated as "the naughty boy of British politics, being told to go and behave and stay out of the way". He says: "That simply isn't going to happen". "It is time", he says, "for those across the political spectrum, particularly in the Conservative Party, to put their cards on the table. No more endless waiting, political hand-wringing or excuses. The campaign must start now".

He claims he is prepared to work with "anyone and everyone who is willing to help us win this referendum and get Britain out of the European Union". But, he adds, "Those who want to help rather than harm our campaign need to stop wasting time, get off the fence and get on with helping us get our country back. There is not a minute to lose".

All this, however, is going to cause more than a little dismay in certain quarters. Ukip, as a party, is demonstrably unprepared to fight an effective campaign. Furthermore, under a leader who has toxified the debate and whose tactical acumen has halved his party's Westminster representation at the general election, few outsiders have any confidence that Ukip's intervention will help the cause.

Certainly, it is far too early to start active high-level active campaigning, and especially as so many of the strategic issues have yet to be resolved.

Thus, when it comes to writing the history of this campaign, I suspect that this week will mark another of those turning points which led us down the path to defeat. And future historians may well remark at the determination of so many on the "no" side, not only to repeat the mistakes of the 1975 campaign, but to invent a few more.

Whatever else, those historians will be wondering why people apparently so committed to leaving the EU were so determined to do everything they could to stay in. They may also wonder  whether there was any need for a "yes" campaign, when the "noes" were so determined to lose all by themselves.