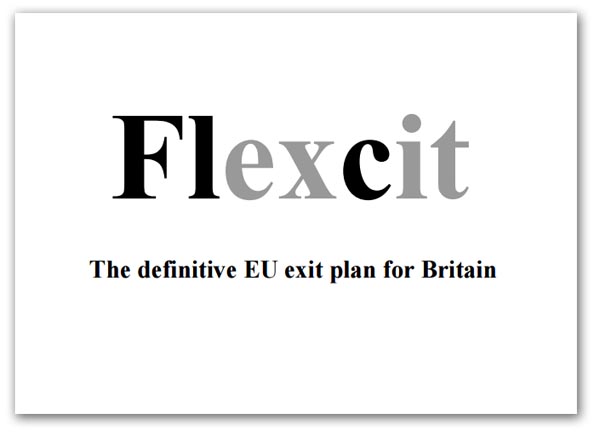 As Espen Barth Eide, former Norwegian foreign minister resorts to outright lies to make his case for the UK remaining in the EU, we publish here today the latest version of Flexcit (v. 24).

With over 30,000 downloads of previous editions, this is already having a significant impact on the debate, evidenced by the fact that the prime minister and others are going out of their way to attack the "Norway Option", when it is only this blog and Flexcit which are really promoting this option. None of the main "leave" campaigns have endorsed it, and very few others are pushing it.

Thus, for all their arrogant assumptions about setting the pace, it is to us that the "remains" are directing their attention – and unsurprisingly so as Flexcit represents the only credible and coherent attempt at producing a structured exit plan.

I've got to the stage now, though, where I am amused by the convoluted attempts of the legacy media and the self-appointed Vote Leave Ltd (among others) to ignore our plan. It even gets to the point where sympathetic journalists (including Booker) who name me in their pieces, find my name and any reference to my work removed by orders from on high.

Nevertheless, despite this pettiness, the Flexcit message is getting through. And in this edition we further refine the withdrawal strategy, grouping three options under the single heading of the "Market Solution", indicative of one of the core elements – protecting our participation in the Single Market as an interim measure.

What a lot of our critics have never realised is that there have always been two options in this grouping – right from the very start. We offered the "Norway Option" as the baseline, but in the event that we were blocked either from EFTA or EEA participation, we detail the so-called "shadow EEA", which gives us the equivalent package, but framed as a stand-alone bilateral agreement.

Newly added is the third option, which we call the "Australian process" – a unilateral declaration of regulatory convergence (and a commitment to maintain it), backed by a formal Mutual Recognition Agreement (MRA) on conformity assessment.

That, plus other elements, give us the right to access the Single Market, relying on WTO non-discrimination rules, which can be relied upon in the event that there is an unwillingness of EU negotiators to entertain a more elaborate agreement.

The particular advantage of the "Australian process" is that it provides the basis of a deal in the event that the EEA is broken up, with the EU offering EFTA (and other) states a form of associate membership.

The crucial element of the "Market Solution", however, is that it is an interim solution – intended only to facilitate a trouble-free, and speedy extraction from the EU, buying time to develop a longer-term settlement.

Most other pundits, offering their own (inferior) plans, then to stop at this point, whereas Flexcit continues to make it clear that withdrawal from the EU is not an event but a process.

Only the fundamentally ignorant could assert that we can undo over forty years of political and economic integration in one fell swoop. We argue that we need a phased withdrawal and offer six stages to achieve that, including one on domestic reform, which embodies The Harrogate Agenda.

And although we offer comsiderable detail on the initial withdrawal process, one of the more important and less recognised parts of Flexcit is stage three. It is there that we set out the parameters for breaking away from the Brussels-centric, supranational market administration, to build up a genuine European Single Market relying on intergovernmental cooperation, based on the institutions of UNECE, in Geneva.

This move recognises the effects of globalisation, and we argue that, through UNECE and other regional and global bodies, we can administer our international trading arrangements without having to subordinate ourselves to a treaty organisation which has as its main objective political integration.

The solution we this offer is truly innovative – but also immensely practical. But it is so far above the heads of most of the pundits that they are rarely able to cope with the ideas on offer. Most of them are trapped by their obsession with defining the exit process, unable to appreciate (or deal with) the idea of a phased withdrawal and continuous development.

On this, we (meaning the many people who have contributed to Flexcit) are no longer really interested in the bleating of the naysayers. The most strident critics have proved to be the ones who have either not read the document or have failed to understand it. Worst are those who pretend to have read it, but then demonstrate no familiarity with the contents, clearly having done nothing more than scan the pages. I see no point in wasting any time with these people.

As to the future, we will of course, continue working on the document. It is and always has been a "living document", gradually evolving and taking on board comments and constructive criticism.

The current edition benefits from the heroic efforts of several readers in proof reading and correcting the copy – for which I am truly grateful. The copy is immeasurably better as a result.

There is also an additional chapter in this edition, bringing together material on financial services under one heading. I will probably add to this in the future, and do not rule out additional chapters on other policy areas.

Readers already familiar with the contents will notice many small updates and changes, and the text has been altered to reflect the change in the referendum question from "yes-no" to "remain-leave". I will continue the updating process and, in due course, will be publishing yet another edition.

The more immediate task, though, is to finish drafting the short version of Flexcit, which we hope to get down to about 35 pages, with the intention that it should be published by the Bruges Group to coincide with the formal launch of the RPG in the New Year.

In the meantime, I welcome – as always – comments and observations, especially those directed at making the document even better than it is. And in due course, we intend to submit this to the Electoral Commission as an example of what an exit plan should look like, ready to point out the manifest inadequacies in the efforts produced by others.

We make no apologies for this. The collective expertise of the contributors to this work exceeds that available to the totality of the current, formal "leave" groups and their hangers-on. By a country mile, Flexcit remains the best, most comprehensive exit plan available, and the determination of the media and others to ignore it says more about them and their own limitations than it does about us.

Flexcit is here to stay, and whether they like it or not, it will continue to set the terms of the debate.