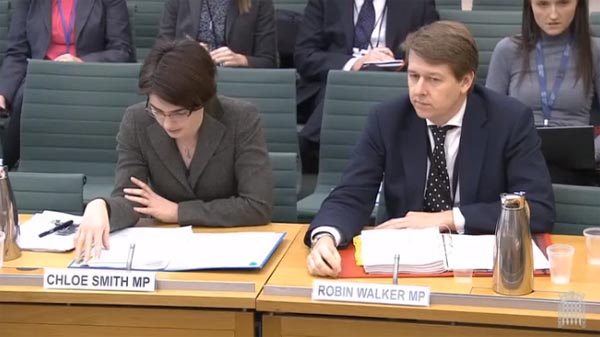 No such specific announcement has been made but that nevertheless is one conclusion that could be drawn from government evidence to the Northern Ireland Affairs Committee yesterday.
In front of the committee, chaired by Conservative MP Dr Andrew Murrison, were Chloe Smith and Robin Walker, both Parliamentary Under Secretaries of State, respectively from the Northern Ireland Office and the Department for Exiting the European Union.

Between them, under questioning from the chair, from Conservative MP (former Colonel) Bob Stewart and Lady Hermon (Independent), they affirmed that the UK would take no steps to harden the Northern Irish border after Brexit, even if we crash out without a deal. This is picked up by the Irish Times which quotes Walker at length.

"The UK would not under any circumstances want to be taking steps to harden that Border and interrupt people’s daily lives", the paper has him say. "So we will make sure that we will do everything in our power so people can go on with our daily lives and that our commitments under the Belfast Agreement are met. And whatever contingency planning the government undertakes will absolutely have those principles in mind".

Colonel Bob Stewart was pretty emphatic in his line of questioning. As an officer of the 1st Cheshires, he'd done several tours in Northern Ireland at the height of the troubles, and had been hero of the Droppin Well bombing at Ballykelly in 1982.

Since Colonel Bob knew that "hard borders" were indeed "hard", he didn't want to see border posts all over again. His experience of them being attacked had warned him off the idea.

As far as Brexit was concerned, therefore, one way of doing it was to say that on the Northern Ireland side of the border, "there will be nothing on the border". We say to the EU, "you do what you want". We had to find a system, he said, where cars could move through the border without being stopped.

Again, it was Robin Walker determined to share that vision. There would be no physical infrastructure on the border said the PUSS. "We don't believe there should be physical infrastructure on the border. We want to preserve the free movements that we have today". And that was enough for Colonel Bob. "If the European Union want to put up barricades, that's up to them", he declared.

It was then the turn of the doughty Lady Hermon, she of the constituency of North Down. First elected for the Ulster Unionist Party, she had stood as an independent MP since 2010. And now she was asking the ministers how, in the event of a "no deal", you would avoid a hard border? "I need you to spell out what will happen in the event of a 'no deal'", she said.

That was interesting phrasing: ""The UK would not … want to take any steps to harden the border", Walker had said. That's not exactly a ringing, absolute commitment – it's more of an aspiration.

Nonetheless, we can see what the line is, the "take home" message is that the UK has no intention of putting up infrastructure at the border. And without that, any attempt to control traffic at the border would result in total chaos. Without the facilities, you simply cannot manage customs checks, much less the complex sanitary and phytosanitary checks.

Therein lies the enigma. The UK imports goods from all over the world and, apart from EU goods, applies border controls of varying sophistication, as well as the "official controls" on animals and foods, and other products. But once we leave the EU, to us, EU countries have to be treated the same as all other countries with which we trade, under exactly the same terms.

This is a matter of WTO rules – the one's that so many "ultras" are so keen to pursue. The WTO non-discrimination requirements mean that, if we apply no checks to EU goods at the Northern Irish border, then we cannot apply them anywhere else. It really is as simple as that.

Yet, here we have two ministers of the crown, and a room full of MPs, and none of them thought to mention this simple fact. They were all prepared to blather about anything under the sun, but not one seemed to be aware that what was being proposed could not be validly implemented under international trade law without us first dismantling all our other customs and sanitary controls.

Furthermore, the consequences of breaching WTO rules are not to be sneezed at. Any country adversely affected can complain to the WTO dispute panel and, if its complaint is upheld (by the appellant body if necessary), it can be allowed to impose sanctions on UK exports. The highly damaging effects would, most likely, make heavy inroads into UK trade, with significant impacts on GDP.

One would have thought that at least one MP might have been aware of this issue, but to expect MPs actually to know anything of what they are doing seems too much to ask. And this is by no means the first time a select committee has dropped the ball. One really does wonder what the point is of having them.

Gradually, though, some of the essential information is getting through. James Hookham of UK Freight Transport Association (FTA), was also giving evidence yesterday, only to the Exiting the European Union Committee. And he had got the message. Leaving the Single Market meant that checks at the point of production move to checks at the border.

Attempting to assess the state of play across the EU, he had been trying to contact customs officials from different administrations. Irish border officials, he said, were being helpful but he was unable to get French customs "to pick up the phone".

Hookham was looking for answers to four questions: future tariff arrangements; "conformity checks" on exported goods; whether vehicle permits would be required for trucks to cross borders; and recognition of driver qualifications across borders. Without answers, Hookham averred that keeping Britain trading might not be possible.

And more particularly, he said, the free flow of goods would depend on whether the customs operations in France, Belgium, Holland and Ireland would be ready.

The consistent theme was the complaint of "uncertainty", but particularly was Sian Thomas who warned that because Great Britain had been working with the EU (and its predecessors) since 1972, there was a lack of expertise on how to manage the export processes.

Companies were beginning to make decisions, and where they could they were moving production to the mainland – something which the banks are also doing.

If one wanted to see evidence of the UK sliding inexorably to disaster, one just needs to look into these select committees. The issues are there, but I don't see any MPs taking them on board.